Eugène Scribe (1791–1861) was a leading French librettist and a pioneer of vaudeville. His opéra comiques gained international popularity and his grand opera librettos were part of a revolution in music drama that succeeded in winning over new audiences to the Paris Opéra in the 19th century.

Born and raised in Paris, Scribe began his career in law but soon turned his talents to writing for the stage. His first piece Le Prétendu sans le savoir was performed in 1810. He wrote a large number of dramas for the major theatres of Paris in the 1820s, as well as publishing some successful novels, and was awarded the Légion d’Honneur in 1827. By 1830 he was well-established and financially successful, but still found time to work with many young and inexperienced composers and writers, and also set up a fund to help impoverished musicians and dramatists. In 1836 he was elected a member of the Académie Française.

Scribe was prolific and collaborated with numerous composers, including Meyerbeer, Verdi, Auber, Donizetti and Gounod. Unusually for the time, he often took inspiration from novels, historical events and his own plays when writing his operas. He was considered to be difficult to work with – often changing his librettos at the last minute – but his mastery of dramatic technique and his ability to create original and powerful situations are widely acknowledged. 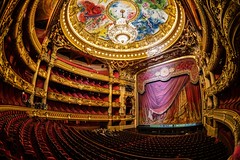 A look at the opera as part of a distinguished operatic tradition.