British director Deborah Warner made her Royal Opera debut in 1997 directing The Turn of the Screw at the Barbican Theatre. In the 2018/19 Season she directs Billy Budd for the Company.

Warner has been a resident director for the Royal Shakespeare Company (1987–9) and an associate director at the National Theatre (1989–97). Notable theatre productions include Richard II, King Lear, The Good Soul of Szechuan, Happy Days and Mother Courage and Her Children (National Theatre), Titus Andronicus, King John and Electra (RSC), Hedda Gabler (Abbey Theatre and BBC2), a worldwide tour of The Waste Land, Julius Caesar and The School for Scandal (Barbican). Film credits include The Last September. Warner was made a Chevalier de l’Ordre des Arts et des Lettres by the French Government in 1992, an Officier des Arts et des Lettres in 2000, and Commandeur des Arts et des Lettres in 2013. She was created a CBE in the 2006 Queen’s 80th Birthday Honours for services to drama. 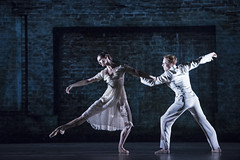