A selection of your tweets about Concerto, Las Hermanas and Requiem. 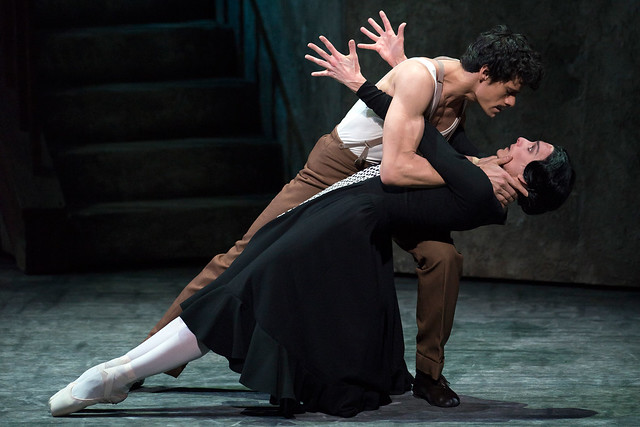 A selection of your tweets about Concerto, Las Hermanas and Requiem.

Great triple bill @RoyalOperaHouse #royalballet #ROHmacmillan Choreography that lasts...Bloomsbury Flowers
MacMillan's genius reconfirmed by @RoyalOperaHouse in #ROHmacmillan triple. Beautiful, haunting, epic.Col Mack-Black
Re imagining the beauty of #Requiem #ROHmacmillan last night. All be it in my living room, doing the laundry. #danceexistsinthepsycheMichael P Johnson
When the current season was announced I thought #ROHMacMillan would be a special treat. I was not disappointed tonight. Lee McLernon
Kenneth MacMillan during rehearsals for La Fin du jour. © 1979 Roy RoundRoyal Opera House Covent Garden
The evening began with Concerto...
#Concerto much tighter than last time it was revived, too. All in all, quite the immersion in MacMillan's world... #ROHmacmillanLaura Cappelle
Does anyone know why everyone else got bodysuits but Carlos Acosta had to play in his pants? Did he forget his kit? #ROHmacmillanMilly Melon
Concerto was plenty of fun and high energy, hoping for better synchronisation next time #ROHmacmillanLisa Marchi
Concerto is what a football crowd would look like if they got a professional in to choreograph the Mexican Wave #ROHMacmillanVampire Soup
Yuhui Choe and Steven McRae in Concerto © Johan Persson/ROH 2010Royal Opera House Covent Garden
...Took a dark turn with Las Hermanas...
I think I need a cup of sweet tea and a cuddle after #LasHermanas. *tries not to whimper* #ROHMacmillanVampire Soup
Fab #ROHMacMillan triple @RoyalOperaHouse.Stunning performances but Las Hermanas my fave.Wouldn't want to meet @_TSOARES down a dark alley!Vicky P
#ROHmacmillan #LasHermanas what a movember from @thiagosoares MacMillans virtuosity, expression and drama and power was fearlessly shown.Michael P Johnson
Massive thumbs up for MacMillan's Las Hermanas; a short narrative ballet packing plenty of drama in 26 min. #wewanttoseeitagainThe Ballet Bag
Artists of The Royal Ballet in Las Hermanas. © Bill Cooper / ROH 2012Royal Opera House Covent Garden
...and closed with the dream-like Requiem...
#Requiem is a good deal less devastating than I remember. Very sad and calming, like walking through a country graveyard. #ROHmacmillanVampire Soup
@RoyalOperaHouse loved the sense of community in Requiem, almost like an anti-Rite of Spring #ROHMacmillanTim Johnson
Stunning Requiem to finish #ROHmacmillan. In particular, Nuñez and Benjamin giving consummate performances.DaveTriesBallet
Absolutely adore Requiem: the idea that such beauty can arise from such grief (both in music and choreography) is astounding. #ROHMacmillanMargaret B
Members of The Royal Ballet in Requiem © Tristram Kenton/ROH 2011Royal Opera House Covent Garden
A few press reviews...
The Royal Ballet - reviewKenneth MacMillan's career-long mission to push ballet into new and often difficult terrain was reflected in the range of music he used a...
Concerto/ Las Hermanas/ Requiem/ Royal Ballet, Covent Garden, WC2 - reviewFirst we had the Royal Ballet's revival of Prince of Pagodas with its sci-fi sets and Britten score. Now they perform a triple bill of hi...
Concerto/ Las Hermanas/ Requiem, The Royal Ballet | Dance reviews, news & interviews | The Arts DeskSex as politics: Zenaida Yanowsky and Thiago Soares in Las Hermanas With a reputation as the prince of unflinching emotional catharsis, K...
Review: Royal Ballet Mixed Bill @ Royal Opera HouseThe world of classical ballet has always indulged in tragedy - cursed enchantments, jealous rivals and doomed romance are bread and butte...
Find out more about the work of Kenneth MacMillan...
A guide to Sir Kenneth MacMillanThe choreographer behind some of the greatest ballets of the 20th century, Sir Kenneth MacMillan (1929-1992) is an illustrious figure in ...
Listen: Deborah MacMillan on the work of Kenneth MacMillanThe work of choreographer Kenneth MacMillan was the subject of a recent ROH Insights session with Lady MacMillan. Deborah MacMillan spoke...
Gallery: Kenneth MacMillan's career in photosWith twenty years having passed since his death, Kenneth MacMillan remains a towering figure in the world of ballet. He choreographed wor...
What were your thoughts of the MacMillan Mixed Bill? What was your favourite of the three works?