Young Artist Profile: Justina Gringyte on the challenges of performing in The Minotaur

The Lithuanian mezzo-soprano looks back on her career so far. 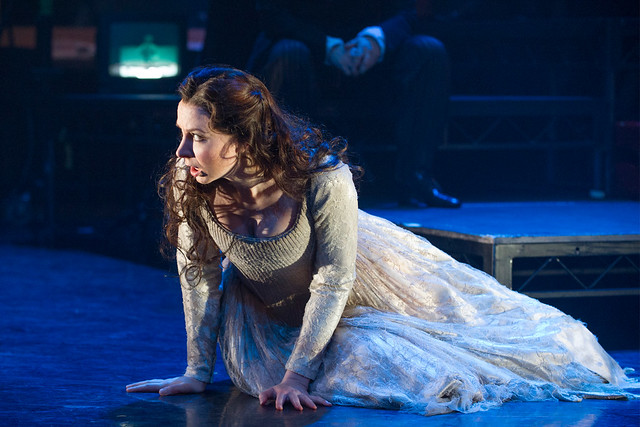 Shortly after joining the Jette Parker Young Artist programme in 2011, Justina Gringyte made her Royal Opera House Main Stage debut in Plácido Domingo’s Operalia gala. Performing the role of Rigoletto’s Maddalena, she shared the stage with some of the greatest opera singers of the last thirty years. A year later, she appeared at the Our Extraordinary World gala, singing ‘Im Treibhaus’ from Wagner's Wesendonck Lieder, in front of the Queen. ‘The two galas have been real highlights for me,’ she explains, ‘from a singer’s point of view, they were unbelievable, unforgettable and beyond all my expectations.’

For Justina, performance has always been a passion. ‘Before I even saw opera, I knew I wanted to be a singing actress,’ she remembers. ‘When I was small, I would put on my mum’s clothes and use the table as my stage. My dad was a singer and my mum was an actress, so I thought I would combine them both!’

Despite her singing ambitions, before pursuing a career as a vocalist she studied piano. ‘My father always said I needed to be musically well-educated and that piano would serve me well. I was fanatical about it. Playing the piano was my way to let out music and to express myself.’

Even so, when Justina first came to the UK in 2006 on an Erasmus programme, it was as a singer rather than a pianist. ‘I started focusing on singing when I went to the Academy of Music in Lithuania. Then, when I came to the UK, I met singing coach Buddug Verona James: she is the main reason I’m here. Because of her, I returned to study a Post-Grad with the Royal Welsh College of Music and Drama. Then I got into the National Opera Studio, along with fellow Jette Parker Young Artists Hanna Hipp and Susana Gaspar.’

The Jette Parker Young Artist Programme employs singers as salaried members of The Royal Opera for a two-year period, offering instruction in all opera disciplines, including stagecraft, languages and musical interpretation. ‘For me it’s wonderful that I can learn languages. The full package, and the support it offers, is fantastic and some of the people on the programme have really helped me develop as an artist.’

Over the course of her first Season, Justina performed roles ranging from Flora in Verdi’s La traviata, to the Third Nymph in Wieler and Morabito’s controversial production of Dvorák’s Rusalka. She is currently appearing in Harrison Birtwistle’s The Minotaur.

‘It’s a very powerful piece and the whole opera is very good theatre,’ she explains. ‘The music is colourful, and of course, John Tomlinson, Christine Rice and Johan Reuter are such a strong cast.’

Justina will sing the role of Third Innocent, in a group with five singers and several actors. ‘It’s a real challenge. I actually find my role really difficult. Vocally it’s very stop and start and the stage rehearsals are tricky.’