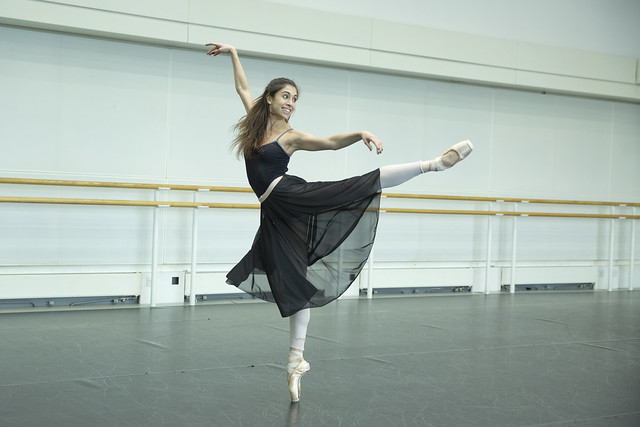 Yasmine Naghdi in rehearsal for The Invitation, The Royal Ballet © 2016 ROH. Photograph by Andrej Uspenski

Kevin O’Hare, Director of The Royal Ballet, announces that Yasmine Naghdi has been promoted to Principal dancer, the highest rank in the Company. O’Hare comments, ‘I’m delighted to promote Yasmine Naghdi to Principal. She has had an extraordinary year, making successful debuts in a number of classic and contemporary ballets, and I look forward to this new chapter of her career and the opportunities that await.’

Born in London, Yasmine Naghdi joined the Company in 2010 after training at The Royal Ballet School. Yasmine’s extensive repertory includes Princess Aurora (The Sleeping Beauty), Juliet (Romeo and Juliet), Olga (Onegin) and the Sugar Plum Fairy (The Nutcracker). Her contemporary work includes Woolf Works by Wayne McGregor, David Dawson’s The Human Seasons and George Balanchine’s Tarantella. Yasmine’s first performance as a Principal will be in The Royal Ballet’s special presentation ‘Opening the New’ in September as part of the Hull UK City of Culture celebrations. Yasmine will perform with Hull-born Xander Parish, First Soloist with the Mariinsky Ballet, alongside Principals and Soloists from The Royal Ballet.

Kevin O’Hare has also made the following promotions within the Company:

Matthew Ball and Marcelino Sambé are promoted to First Soloist.

Giacomo Rovero, Francisco Serrano and Charlotte Tonkinson become Artists, after joining the Company at the start of the 2016/17 Season as Aud Jebsen Young Dancers. This programme provides recently graduated dancers a year’s contract to work and perform alongside the corps de ballet of The Royal Ballet. In the 2017/18 Season the Company welcomes six graduates from The Royal Ballet School who join as Aud Jebsen Young Dancers: Joonhyuk Jun, Joshua Junker, Sae Maeda, Nadia Mullova-Barley, Aiden O’Brien and Amelia Palmiero.

Staniłsaw Węgrzyn joins the Company as Prix de Lausanne dancer for the 2017/18 Season.

First Soloist Melissa Hamilton returns to the Company after a leave of absence performing with Semperoper Dresden.

The following dancers leave the Company:

Kevin O’Hare, Director of The Royal Ballet, comments, ‘Matthew gave many fine performances during his time with The Royal Ballet and danced a number of leading roles from across our repertory in ballets including Manon, Don Quixote, Swan Lake, Giselle, The Dream, Onegin and Romeo and Juliet. We wish him well for the next stage of his performing career.’

This article has 57 comments