Over the course of a week, we spoke to a diverse range of people who enjoyed the view from seat K15 in the Orchestra Stalls. 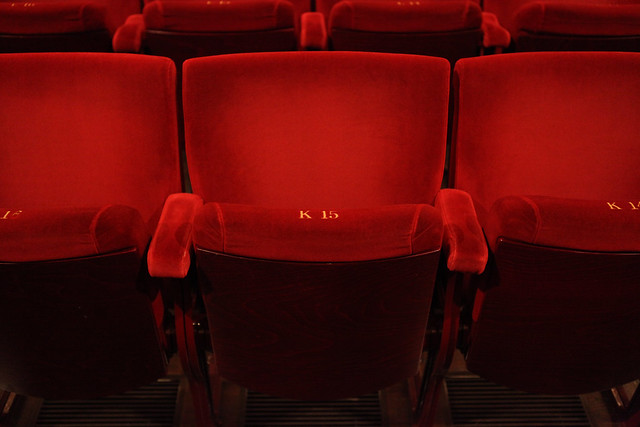 Seat K-15 in the main auditorium at the Royal Opera House © ROH/Ruairi Watson, 2013

‘I was first brought to the Royal Opera House by my godmother on my ninth birthday, when we saw The Sleeping Beauty designed by Oliver Messel. Afterwards I told my godmother that when I grew up I wanted to be either a ballet dancer, or a designer. I eventually trained as a set and costume designer at the Central School and, one night, my tutor met Oliver Messel at a party. He was looking for someone to paint some costumes for him and my tutor recommended me. I worked with Oliver Messel several times after that. I always sit in the Orchestra Stalls and much prefer it now it’s on a rake. The last ballet I saw was Ceremony of Innocence/The Age of Anxiety/Aeternum – I really enjoyed Aeternum. I try and come and see most ballets here.’

‘This is my first time at the Royal Opera House and I’m really enjoying it. I like everything about the ballet, but I really enjoy watching the dancers doing their lifts. I love the scenery for The Age of Anxiety as well. I can’t wait to come back again with my school.’

‘I like to sit in K15 as it’s really in the middle of the auditorium, so I can see the whole stage. It’s the perfect place to check on the lighting and the scenery and – being so close to the orchestra pit – the orchestra too. It’s also close enough to the stage that I can run on if I’m needed during rehearsals.’

Pamela Kissman
Dr Anthony Pike, her late brother, has his name on a plaque on K15

‘I like to think of him sitting there still, watching everything. He loved classical ballet: the history, the skill, the music, the theatre, the beauty of it. He wanted to contribute to the Royal Opera House so, on his death in 2009, a portion of his estate went towards pointe shoes for Royal Ballet dancers and also on a seat plaque in the auditorium. When I come now, it’s not always to sit in K15, but I love to be able to remember him coming here and imagine him sitting there.’

‘I like seat K15 as it is close enough to the stage and close to the centre too. Attending rehearsals or a Sitzprobe has helped me understand opera better and a backstage tour has made me more familiar with the work of the Royal Opera House, as did the Queen’s Jubilee Gala. I have fond memories of many productions, particularly DGV: Danse à grande vitesse, not only for the star performers (Natalia Osipova, Marianela Nuñez, Edward Watson…) but also for the choreography by Christopher Wheeldon – I wish I could see it again. Dialogues des Carmélites left me speechless; it was beautiful singing and the austere staging was perfectly appropriate. The last scene in particular was so contained and yet so heartbreaking. I remember meeting a perfect stranger in the hall who felt the urge to tell me how moved she was. It seems I come to see Tosca every year now… there is always a reason. In 2014 it was to hear Roberto Alagna and I was not disappointed.’

Find out more about naming a seat.

This article has been categorised Off stage and tagged history, legacy, name a seat, supporting

Leave a reply to lablady · Cancel