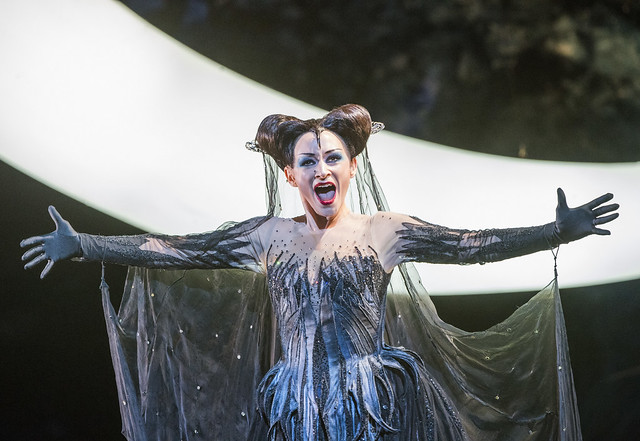 Sabine Devieilhe as Queen of the Night In Die Zauberflöte, The Royal Opera Season 2017/18 © ROH 2017. Photograph by Tristram Kenton.

In the run-up to The Royal Opera's live cinema relay of Mozart’s The Magic Flute (Die Zauberflöte) on 20 October 2017, South Korean soprano Haegee Lee took to Facebook Live to give us a taste of one of the most explosive and menace-filled tunes in all opera – the Queen of the Night's aria, ‘Der Hölle Rache’.

The opera tells the story of Prince Tamino who promises the Queen of the Night that he will rescue her daughter Pamina from the clutches of the enchanter Sarastro. Once Pamina has been freed from his control, ‘Der Hölle Rache’ sees the Queen ordering her daughter to kill Sarastro.

As demonstrated by Haegee and pianist David Gowland, The Magic Flute features some of Mozart's most memorable music, and even the composer's supposed rival Salieri (a conflict so memorably immortalized in the play and film Amadeus) was begrudgingly forced into conceding its genius.

Haegee is a member of the Jette Parker Young Artists scheme, a Royal Opera programme that supports the artistic development of talented singers at the beginning of their career.

To receive notifications about future livestreams, become a fan of the Royal Opera House on Facebook:

The Magic Flute runs until 14 October 2017. Tickets are still available.