Watch: Members of the cast and creative team on Cavalleria rusticana / Pagliacci

Backstage films from the live relay of Cavalleria rusticana / Pagliacci, including rehearsal footage and exclusive interviews. 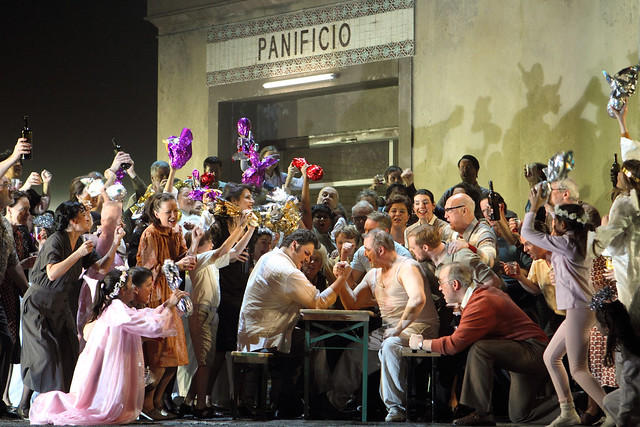 Damiano Michieletto’s production of Cavalleria rusticana and Pagliacci was relayed live to cinemas around the world on 10 December 2015.

During the interval audiences had the opportunity to watch additional short films including interviews with the creative teams and footage of the rehearsal process.

If you missed the screening on the night or are keen to know more about the production, here is another opportunity to see the films:

An introduction to Cavalleria rusticana

Michieletto's new production places both the sense of community and the verismo elements of the opera centre stage. Opening with the whole village coming together to celebrate Easter, the isolation of Mascagni’s heroine Santuzza in the opera is particularly noticeable.

‘Santuzza’s so jealous, just this wave of rage', says Eva-Maria Westbroek of her character's mentality. 'She goes to Lola’s husband and tells him what’s been going on, which is of course the biggest mistake of her life’.

An introduction to Pagliacci

‘Pagliacci opens in a very particular way’ says the director. ‘The prologue is basically saying to the audience that we should take theatre as something real'. This theme carries through both to the play within the play in the second half of Leoncavallo’s opera, and to the dreams and realities of the characters.

For conductor Antonio Pappano, Mascagni and Leoncavallo’s music is ‘extremely heartfelt’ and quintessentially Southern Italian. In this film he explores both the atmosphere of village life in Southern Italy (the home of his own parents), and the differences of Italian verismo opera