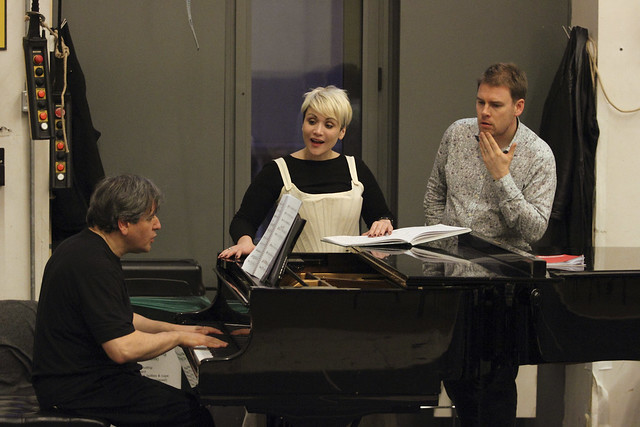 Antonio Pappano, Carmen Giannattasio as Nedda and Benjamin Hulett as Beppe in rehearsal for Pagliacci, The Royal Opera © 2015 ROH. Photograph by Catherine Ashmore

The Royal Opera’s new production of Cavalleria rusticana/Pagliacci was the focus of a recent live-streamed ROH Insight event, led by Director of The Royal Opera Kasper Holten.

The stream saw key figures of the creative and artistic teams come together to discuss the process of making a new production, and the challenges and rewards of performing these iconic verismo works.

World-class sopranos Eva-Maria Westbroek and Carmen Giannattasio each star in The Royal Opera’s new production – Westbroek as Santuzza in Cavalleria rusticana, and Giannattasio as Nedda in Pagliacci. Giannattasio described the balance between the director’s influence and her own in a new production as ‘about 50%. I bring my ideas, my gestures, and then I get Damiano’s suggestions. I was thinking of Nedda more as a victim, but Damiano explained how there is all of that, but she’s also very sharp’.

‘The wonderful thing with these verismo operas is that it all comes together, that’s why they’re so powerful’, says Westbroek of the operas’ appeal. ‘The music, the emotion and the timing, they’re all in the same moment. It is all action – that’s why it’s so exciting.’

Both singers enthuse about the opportunity to work in this repertory with Music Director Antonio Pappano, who conducts this run of performances. Westbroek summarized: ‘It’s heaven. He’s the best; we love him. He’s amazing and inspiring; so detailed, so moving and so supportive.’

Paul Wynne Griffiths, a member of The Royal Opera’s music staff, is working with Pappano on the production and explores the music of these two operas – and how for the conductor ‘in every bar there is a decision to be made’.

He describes some of the specific musical techniques used by composers Mascagni and Leoncavallo: rubato, ‘not playing in tempo but making the music breathe, phrasing it’; portamento, ‘carrying the voice to make a bridge from one note to the next’; and how often the melody is held in the orchestra, while the singers ‘speak’ on a single note. He’s joined by Jette Parker Young Artists Vlada Borovko and Samuel Dale Johnson, who perform Nedda and Silvio’s duet ‘A quest’ora che imprudenza’ from Pagliacci.

The production is a co-production with Opera Australia, La Monnaie, Brussels, and The Göteborg Opera, and is staged with generous philanthropic support from the Royal Opera House Endowment Fund.