To celebrate the staging of The Importance of Being Earnest, three examples of this very English institution as a battleground. 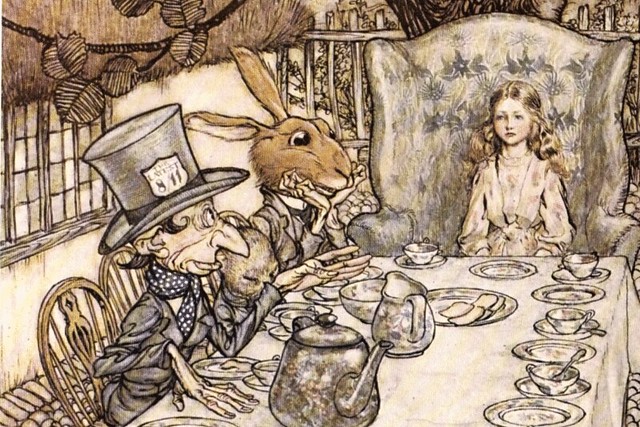 The Mad Hatter's Tea party from Alice's Adventures in Wonderland by Arthur Rackham, 1907

Afternoon tea has long been a favourite event in dramas, when its formalities and rituals can be stood on their head for fun, embarrassment and shock. Gerald Barry takes an unexpected direction presenting afternoon tea in his opera of Oscar Wilde’s The Importance of Being Earnest with a tea party that's a masterpiece of vitriol in the guise of utter politeness. But Wilde isn’t the only one to tackle how this ‘civilized’ institution can bring out the worst in people and so we thought we'd take a look at a few iconic afternoon teas. Cucumber sandwiches at the ready…

Everything about the Mad Hatter's tea party is wrong. It is held permanently at six o’clock as the Mad Hatter’s watch has stopped at that point, Alice is first offered wine – which they don’t in any case have, the Hatter accuses the March Hare of oiling his watch with butter, and the March Hare dips the Hatter's watch into his cup of tea to see if that will start it. The table is piled with unwashed crockery, so the Mad Hatter, Dormouse and March Hare just keep moving round to clean place settings (the servants here have passed from being taken for granted to being non-existent). The conversation has the trappings of polite exchanges, but constantly goes wrong, most famously when the Hatter asks the  riddle: ‘Why is a raven like a writing desk?’ No one knows the answer; it is a conversational dead end. Nothing at this tea party functions: the timing, the food, the drink, the service, the conversation. It is the opposite of the ordered, polite, structured afternoon tea of a well-to-do Victorian household. Carroll pokes observational fun at daily routine.

I Lived with You

The class-bound concerns of afternoon tea were picked on by Ivor Novello in his 1932 stage farce I Lived with You, made into a film the following year with many of the same actors. Novello himself plays the lead:  a Russian prince who fled the Revolution and is adopted by a social-climbing middle-class household in Fulham. This family is full of pretensions, desperate to present an image above its station; the prince is used to doing exactly what he wants without fear of consequences, and inconsiderately encourages them to emulate him. The result is increasing chaos and confusion.  Afternoon tea is the point at which everything finally goes horribly wrong. As a bit of social one-upmanship, the respectable ladies of the neighbourhood are invited to meet the Prince. The Prince insists that vodka takes the place of tea – but still served in the fine china cups and saucers: the cup that cheers and inebriates. Ultimately, the snobbish, middle-class women who play at being civilized through an increasing alcoholic haze provide the perfect audience for the noisy and revelatory appearance of the mistress of the husband of the house. The greater the veneer of social-climbing etiquette, the further the fall off the unvarnished pedestal.

In Mary Poppins, author P.L. Travers created a highly subversive character. On the surface the magical nanny is strict and formal in the novel, with an extra dose of charm in Julie Andrews’s portrayal in the Disney film. But Mary Poppins really exists to challenge and overturn pretty much anything that limits her children’s opportunities, hopes and imagination.  She likes afternoon tea, and an idealized version is described in her perfect day out with the street-painter Bert. The pair jump into Bert’s pavement art of a lovely countryside scene and have afternoon tea with ‘a pile of raspberry jam-cakes as big as Mary Poppins’ waist’. But there is a more famous tea party in the book and film, held on the ceiling. Mary Poppins’s Uncle Albert is full of laughing gas, and the nanny’s two charges Jane and Michael Banks catch the same affliction. Uncle Albert, Jane, Michael and Mary Poppins all end up eating ‘piles of bread and butter, crumpets, coconut cakes and a large plum cake with pink icing’ while suspended near the ceiling. With her usual mock-show of disapproval, Mary Poppins describes such behaviour as ‘silly and undignified’ – but readily joins in. This tea party is a witty subversion of respectability and convention, and suggests something of the wide-eyed perspective of children trying to make sense of a confusing adult world of strange social rituals.

What are your favourite iconic tea parties?

The Importance of Being Earnest will be performed at the Barbican, London from March – April 2016, and at the Rose Theater, New York in June 2016.  Find out more about booking dates.

The production is generously supported by The John S Cohen Foundation.