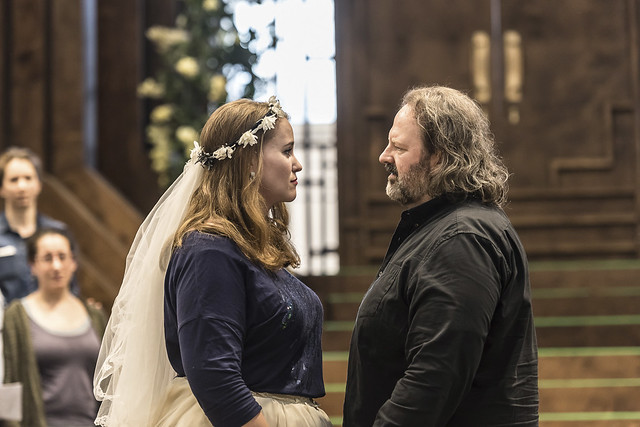 The dramatic resolution of Wagner’s opera Die Meistersinger von Nürnberg comes in Act III scene 5, with Walther’s victorious rendition of his Prize Song. However, it is the previous scene’s great Quintet, ‘Selig, wie die Sonne’ (As blissfully as the sun), that provides a different, more intimate kind of resolution for each character and the crises they face.

These crises are eloquently explored earlier in Act III when young maiden Eva visits Mastersinger and cobbler Hans Sachs. Sachs senses her anxiety about the forthcoming song contest and invites Walther to perform the Prize Song on which he and Sachs have been working for her. Eva is profoundly moved, not only by Walther’s skill but through her realization of how much Sachs loves her. She tearfully assures Sachs how much she cares for him and owes him, and tells him that he would have been her choice as a husband – had love not led her to Walther. Sachs gently responds (to a teasing quote of Wagner's famous ‘Tristan’ chord) that he has no desire to stand in the way of true love. He summons his apprentice David and David’s fiancée Magdalene, promotes David to journeyman, and asks Eva to lead the group in a ‘christening blessing’ of Walther’s Prize Song, ‘Selige Morgentraum’ (Blissful morning dream).

The Quintet is infused with a sense of wonder and each singer’s separate line revolves around the word ‘Morgentraum’. But at the same time, Wagner shows that all five characters express different emotions. Eva exults in her happiness and anticipates Walther’s triumph, while Walther rejoices in how his love for Eva has made him into a true artist. David and Magdalene quietly celebrate David’s promotion and plan their wedding. Sachs, meanwhile, delights in Walther’s new song – but can’t help a secret sadness as his chance for happiness with Eva fades.

The Quintet’s radiant music is all the more beautiful for its seeming simplicity. It opens with a 12-bar solo for Eva, loosely evolved from the music of her preceding solo, ‘O Sachs! Mein freund!’. Eva’s earlier agitation is transformed into serene joy, as she sings long, lyrical ascending lines, intertwined with descending phrases for clarinet and oboe. As her melody shifts into that of the opening of Walther’s Prize Song, Hans Sachs quietly enters with a rising phrase in which he muses on his love for Eva, of which he must never tell her. Walther enters next, with a pianissimo expression of gratitude for Eva’s love, followed by Magdalene and David who sing together predominantly in 6ths that express their united contentment. The mood remains calm and meditative, though with progressively richer orchestral and vocal textures, as the four lovers ask if their new-found happiness is only a morning dream.

The Quintet’s final section is one of Wagner’s loveliest inspirations. Eva returns to her original melody, but now first Sachs and then Walther take up the descending woodwind phrases that accompanied her in the first section. They are echoed by David and Magdalene, who express their hopes for their future with increasing excitement. Gentle horn chords usher in the Quintet’s coda, with the two prospective bridegrooms David and Walther singing their falling phrase in 3rds under Eva’s line as she soars to the heights accompanied by rippling harp chords, before the Quintet ends in a quiet reiteration of Walther’s Prize Song in the strings, echoed by Eva’s opening melody in the woodwind.

In his 1851 essay Oper und Drama, Wagner claimed that his new theory of music drama would make the operatic ensemble redundant. We can only be thankful that he changed his mind when composing Die Meistersinger. The opera’s Quintet is a perfect example of how an operatic ensemble can represent and examine both individual and collective emotions. It is also one of the greatest celebrations of art, love and altruism in all opera.