Verdi shines the spotlight on the opera’s bad guys in this thrilling, ferocious duet. 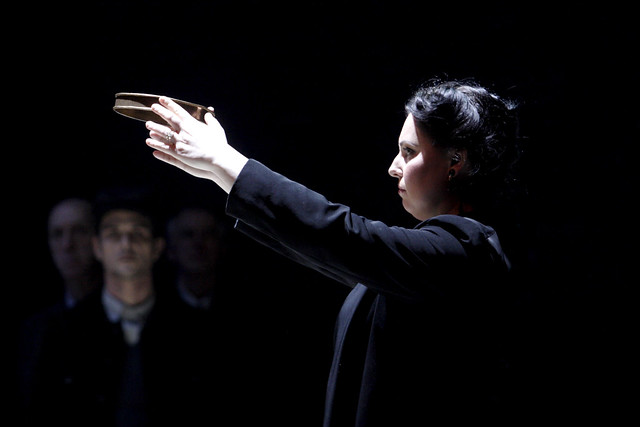 Nabucco is an opera interested in the bad guys. Verdi’s third opera – and his first great success – gives the most forceful characterization to the conflicted and the malicious: the proud tyrant Nabucco, his furious daughter Abigaille, the ruthless Zaccaria, high priest of the Hebrews. The opera is seared through with fierce confrontations – which reach their peak of intensity with ‘Donna, chi sei?’, the Part III duet between Nabucco and Abigaille.

In this opera Verdi largely sticks to the structural conventions of his day – with one or two unusual touches. ‘Donna, chi sei?’ is no different, and for this major duet Verdi follows the usual four-part structure of rapid dialogue leading into a slow, lilting cantabile, followed by an action-packed tempo di mezzo and ending with a fast-paced cabaletta. But Verdi strikingly bends the music to convey with great intensity the very different states of mind of his two protagonists – while also maintaining the similarities we have seen between them earlier in the opera.

Nabucco has been stricken mad at the end of Part II, for his blasphemy against the Hebrews’ God. Abigaille has stepped up to fill the power vacuum, encouraged by her fellow Babylonians. Her subjects are clamouring for the execution of the captured Hebrews – which plays to Abigaille’s plan, as the prisoners include the recently converted Fenena, Abigaille’s sister and great rival. Abigaille has recently discovered that she was adopted by Nabucco – and so she now thrills at the idea of pushing the confused old man into signing away the life of the daughter he loves.

The first movement makes the difference in power between the two vividly clear. The music for the old king is filled with trembling string figures and short, flustered outbursts, suggestive of Nabucco’s frailty, bewilderment and quickly mounting rage. Abigaille, meanwhile, has cool long lines, her steely determination glinting through in the stubborn rising phrases and spectacular coloratura that are features of her part throughout the opera. The orchestra accompanies her in an eager dance tune as she goads Nabucco into signing the decree – which he does to an enraged proclamation: ‘Death to all of Israel!’. There is a repeat of the dancing music as Abigaille treasures her victory – leading to another angry eruption from Nabucco, as he denounces Abigaille as the daughter of slaves.

This is no news to Abigaille. But any final glimmer of hope she may have held for Nabucco’s acceptance is now extinguished forever. As we move into the cantabile, Nabucco sings in lilting, yearning phrases full of anguished realization of what he has done and how far he has fallen: ‘You pitiful old man, you are a shadow of what you were.’ Abigaille’s vocal line, meanwhile, darts around her father’s lament, in gleeful triumph that in its vibrancy and agitation is tinged with acid bitterness – ‘I may lose a father but I have gained a throne’.

Offstage trumpets move us into the tempo di mezzo, sounding the death knell for the captured Jews. After the stillness of the previous section Nabucco is again on the back foot, reeling in shock with fragmented musical echoes of Abigaille’s strong statements. She dominates musically and dramatically, but there is now a sense of hysteria in her ever higher, ever more ornamented vocal lines. The cabaletta begins with another lament from Nabucco, no longer internal but now a direct plea to Abigaille for her compassion: ‘See this old man begging for the child he loves.’ Of course, this is only further fuel to her fury. The final fast-paced section recalls Abigaille’s triumphant dancing music from the beginning of the duet, though the pace is now increased and Abigaille’s vocal line is even more florid. The music races to a close and the curtain drops on one of Verdi’s most furious father-daughter duets.

The production is a co-production with La Scala, Milan, Lyric Opera of Chicago and Gran Teatre del Liceu, Barcelona, and is generously supported by Rolex and The Friends of Covent Garden.