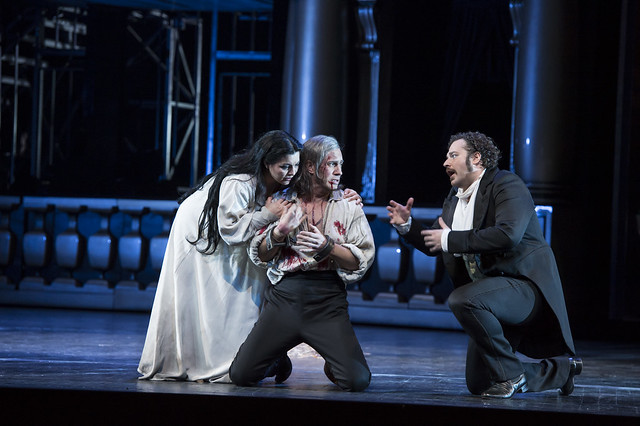 The Royal Opera’s performance of Verdi’s Les Vêpres siciliennes will be broadcast by Radio 3 on Monday 18 November at 6.15pm as part of the BBC’s Verdi 200 celebrations.

Behind the scenes films

As part of the live cinema relay, we showed two behind the scenes films featuring the cast and creative team. These featured exclusive rehearsal footage and interviews.

The story and background

A tale of revenge, family relations and patriotism, Les Vêpres siciliennes is set amid the turmoil of the French occupation of Sicily. Find out more about the piece in our Opera Essentials series.

Created in 1855 for the Paris Opéra, Les Vêpres siciliennes was Verdi’s first grand opera. Richly varied and dramatic, it is packed with fiery choruses for the opposing French and Sicilian forces, large-scale duets and several atmospheric arias. Read about the duet between Henri and Montfort in Act III, just one of the musical highlights in the opera.

More commonly performed in Italian as I vespri siciliani, The Royal Opera’s production is sung in the original French and Antonio Pappano told BBC Radio 3’s In Tune that 'there's a different frisson in performing Les Vêpres siciliennes in French'.

Read audience reactions to the opening night and the live cinema relay, and add your own review.

Other forthcoming BBC Radio 3 broadcasts of Royal Opera productions include Berg's Wozzeck on 2 December and Wagner's Parsifal, which will be broadcast live on 11 December.