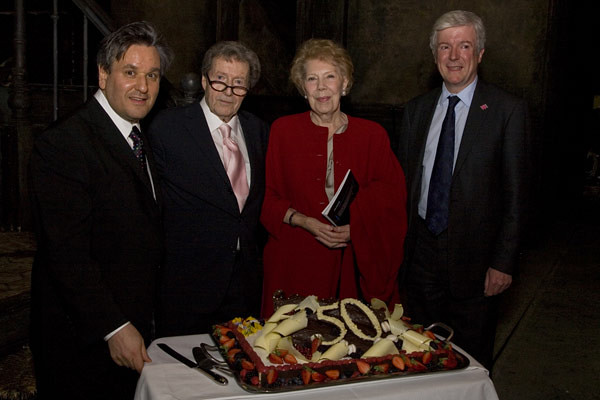 The first night of La bohème closed with a tribute to director John Copley in celebration of his 50th anniversary at the Royal Opera House as a director.

John’s hugely popular production of Puccini’s La bohème has been in The Royal Opera’s repertory for nearly 40 years, premiering in 1974 and since revived 25 times. Other productions by the director have also had impressive longevity - his Così fan tutte and Le Nozze de Figaro remained in the repertory for 24 years and 21 years respectively.

John first appeared on stage in 1948 as a fresh-faced 15-year-old, playing a walk-on role in Aida. He subsequently began work in stage management before becoming a director in 1960. His first production with The Royal Opera was a revival of Robert Helpman’s Madama Butterfly in 1962. He has since witnessed two Royal Opera House rebuilds, directed 15 new productions and worked with most of the greats of the opera world.

Dame Janet Baker wrote a tribute to John on the programme of La bohème's opening night:

"The core of his genius is rooted in his utter respect for the music, and his whole approach revolves around it. Hidden within his lightness of touch is the wisdom which comes when natural gift is allied to the most painstaking work. Performers all over the world acknowledge a huge debt to him, because we know that with him we are in the hands of a master. He has our indescribable gratitude and love on the occasion of this anniversary."

The first night of La bohème also marked the debut of Italian soprano Carmen Giannatassio, singing the role of Mimì. Visit our Flickr gallery for more images of the anniversary celebration.