A look at what has made Tosca one of the most-loved operas. 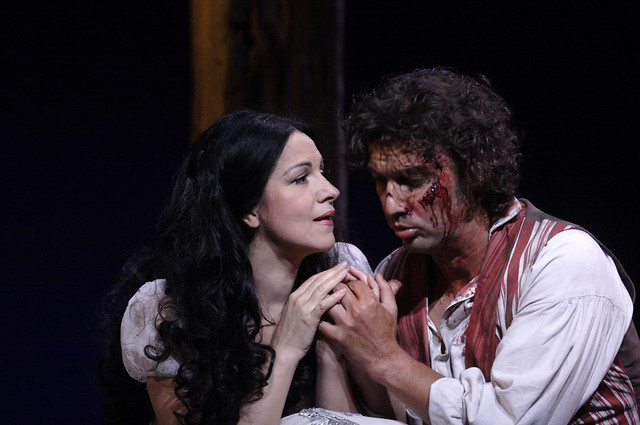 There aren’t many operas that manage to kill off all the principal characters by the end (although many have a good stab at it). But that’s what happens in Tosca – and wonderfully too with one knifing, one firing squad and a sudden suicidal leap. Of the many explanations given about why it has become one of the most loved and watched of all operas, the appeal of the story must be a major one.

The plot is a simple one of love and jealousy. Cavaradossi is an idealist, and almost everything we want in our romantic hero (but a stronger sense of self-preservation wouldn’t go amiss). Scarpia is the villain with no redeeming features (he may love his mother, but we are never told).  The opera, however, is called Tosca, after the woman caught – and finally falling – between two completely opposed views of life. So we have the necessary ingredients for disaster on all character fronts, and can sit back to enjoy the hypnotic appeal of a car-crash in slow motion.

On the straight stage, Sardou’s Tosca was a hit of its day, Sarah Bernhardt famously in the title role to lend it star appeal. But the opera has become international standard repertory, and we almost never come across the play. The music has made the difference. Puccini rises to the occasion to portray emotions of jealousy, rage, power, love, passion, hope with music that we respond to at a visceral level. It is tuneful, taut and overtly dramatic. This is not real life, but a piece of theatre presenting an acutely heightened version of real life. We aren’t cajoled into exact identification with our own lives (at least I hope not!), but are swept away into the extremes of things we usually experience at a diluted level. Not so much ‘escapist’ drama as ‘absorbist’ drama. Suspend any disbelief and just go with it.

We extend our own emotional experiences each time we see the world through the heightened senses of those caught up in the drama. Tosca, Cavaradossi and Scarpia each have their chances to tell us what they think and – most importantly – feel. It is not about realism, but about hyper-reality. It’s no coincidence that the finale to Act I of Tosca makes a great setting for evil conspiracy and the music from Act II for a slow-motion shoot out in Quantum of Solace. If Puccini was writing today, would he be writing opera or big-budget film scores?

Some people use Tosca’s long-lived, global popularity as a weapon with which to beat it up. Can anything so popular actually be any good? Is it just a ‘shabby little shocker’ to amuse the undiscerning masses? Conventionally, popularity has been thought of as the opposite of quality, and there are plenty of TV reality shows to suggest there is a case to answer here. ‘Extraordinary how potent cheap music is,’ as Noël Coward had Amanda say in Private Lives. Which goes to the heart of the critical problem. If music is popular, must it automatically be of indifferent quality? Why can’t something become popular because it is recognized as very very good? This question has plagued Puccini’s reputation since his own day.

Often popular successes are dismissed early on as symptoms of the zeitgeist, with the expectation that they will sink beneath the waves as fashions change. But after a century, the idea of a passing fad really won’t stand up to scrutiny. By the time Tosca finishes here this Season, it will have reached Royal Opera House performance number 471, in the top line-up since World War II with La bohème, La traviata and Carmen. (So we can also say that killing off the heroine in the title is good for box office.) I have read and heard many arguments that deconstruct Tosca in detail – psychological, musicological, dramaturgical. I’ve even written a few. They all have their merits. But I always come back to the same thing. However you package it up or pull it apart, Tosca is just wonderful theatrical entertainment. Isn’t that enough?

This article has been categorised Opera and tagged by giacomo puccini, by Jonathan Kent, Film, James Bond, Production, Quantum of Solace, Tosca