Swanhunter: How The Wrong Crowd use puppets to bring mythical beasts to life

Director Hannah Mulder and Designer Rachael Canning discuss the power of the fairy tale and why Swanhunter is as much for adults as it is for children. 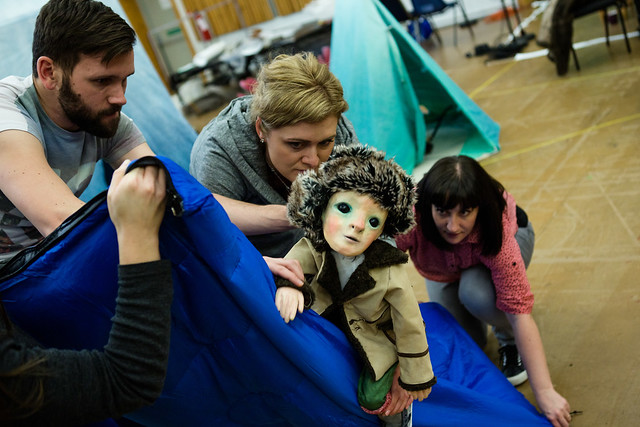 Opera and puppetry combine this April to bring folklore, magic and myth to life on stage in Swanhunter, a new co-production from Opera North and acclaimed theatre company The Wrong Crowd.

The opera, composed by Jonathan Dove with a libretto by Alasdair Middleton, is based on The Kalevala, Finland’s national saga drawn from an oral tradition of folklore and mythology. It follows the adventures of ladies-man Lemminkäinen, who defies the wishes of his mother and travels to the icy North in search of a bride. There, he faces a host of dangers, including the Devil’s Elk and the Swan on Death’s River.

‘Folk stories are a gift to a designer, because there are so many different types of character that you can create and visually interpret in your own way’, says Designer / Puppet Director Rachael Canning. ‘Swanhunter also happens in some amazing and quite alien landscapes. In places such as Iceland, there are so many phenomena that you can't quite explain, and so the idea of 'North' holds a kind of mystery and power that resonates with us, even if we've never been there. A lot of the lighting and design choices in this production are influenced by the far North.’

Rachael formed The Wrong Crowd with writer / designer Hannah Mulder, who is directing Swanhunter, and producer Bonnie Mitchell in 2011. The company focuses on visual storytelling - blending puppetry, music and live action to create inventive, playful theatre that engages audiences of all ages.

‘I think there's something magical about puppets’, explains Hannah. ‘Puppetry does theatrically what we're most excited about – firing the imagination and inviting audiences to play with us.’

Swanhunter is the first opera the company has worked on.

‘It's amazing to have the opportunity to work with music all the way through, especially such powerful music with an evocative libretto’, says Hannah. ‘It's a different process of course, and brings its own gifts and challenges. In some ways, the atmosphere and the key moments are already set down for us, and our job is to interpret them and to bring them to life, rather than create them from scratch, like we have done in the past.’

Swanhunter, which was commissioned by Opera North following the success of Dove and Middleton’s The Adventures of Pinocchio, had its world premiere in 2009. Ingeniously scored, it features a cast of just six singers accompanied by a folk-inspired six-part band. The music celebrates the power of song, featuring magic spells sung by hero Lemminkäinen and technically-demanding coloratura writing for the Swan.

‘Opera is brilliant for puppetry because every bit of music has a certain sort of quality which feeds into everything that you do and all the movement of the puppets. We can create some really fantastic moments’, says Rachael. ‘So far we've been mainly working on the physical aspects. We've been looking at how the different beasts are created, how we create the water for the Swan and how it will swim, and how our singer will reach some stratospheric high notes at the same time as puppeteering!’

Swanhunter was written with a younger-audience in mind, Dove aware that ‘this could well be the first opera that a lot of children see.’ Even so, the music appeals to all ages, something that Rachael and Hannah are keen to emphasize in their production.

‘We want to make something that's accessible and will lead audiences into a world where we can all play together. But the key thing is not to patronise young people and to trust their imaginations and their ability to come with us’, says Hannah. ‘Fairy tales are ideal as they are incredibly powerful stories that speak to all of us – adults and children – about the experience of being alive. It's for the kid in all of us and the adult in all of us on an equal level. Adults aren't just going to take the children. They are both going to really engage with it and come away wanting to talk about it together.’

Swanhunter runs from 2 to 11 April 2015. Tickets are still available.