The rainbow flag is being flown in recognition of London's annual Pride celebrations. 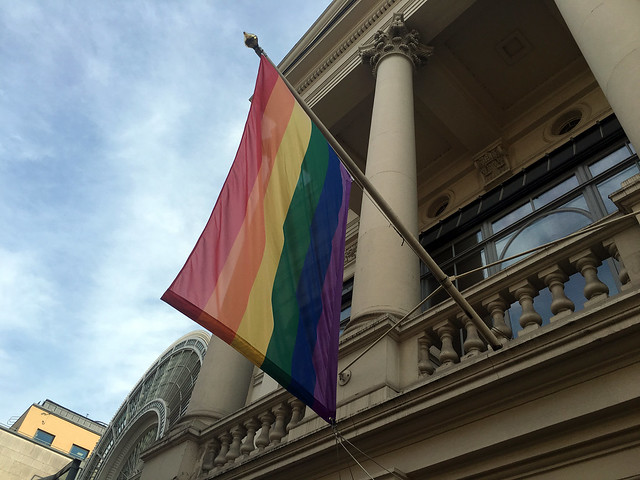 The Royal Opera House has replaced one of its Bow Street Entrance flags with the rainbow flag in celebration of Pride in London 2016.

From 10-26 June the flag will fly on the front of the building, honouring the many gay, lesbian, bisexual and transgender people who have helped make the Royal Opera House the institution it is today.

To mark the celebrations, staff, artists and members of the public are being encouraged to share a photo of themselves with the flag, and share their pictures using the hashtag #ByYourSide, tagging @RoyalOperaHouse and @LondonLGBTPride.

The Royal Opera's Joyce DiDonato, who is currently rehearsing at Covent Garden for her performance in Werther, is the first to take part. Joyce has been vocal in her support for the LGBT community following the tragic mass shooting in Orlando, and posted a performance of 'Dido's Lament' filmed at the famous Stonewall Inn in New York City on her Facebook page.

Pride and Joyce From 10-26 June, we'll be flying the rainbow flag on the front of the building as part of the annual Pride celebrations in London, honouring the many gay, lesbian, bisexual and transgender people who have helped make the Royal Opera House the institution it is today, both on and off stage. @joycedidonato shared her support by taking a photo with the flag earlier today. #lgbt #pride #lovewins #love #pride2016 #nofilter #byyourside #loveislove #ally #opera #royaloperahouse #coventgarden #rainbow #rainbowflag

The ROH is a supporter of Stonewall and a member of its Diversity Champions Programme.

The ROH encourages job applicants from diverse backgrounds and values the positive impact that difference has on our teams. Find out more about current vacancies, apprenticeships and work experience schemes.

This article has been categorised Off stage and tagged diversity, Joyce DiDonato, LGBT, Pride