The group of 11 to 25-year-olds compose, design and stage A Little Thing Called Life in conjunction with a number of artists. 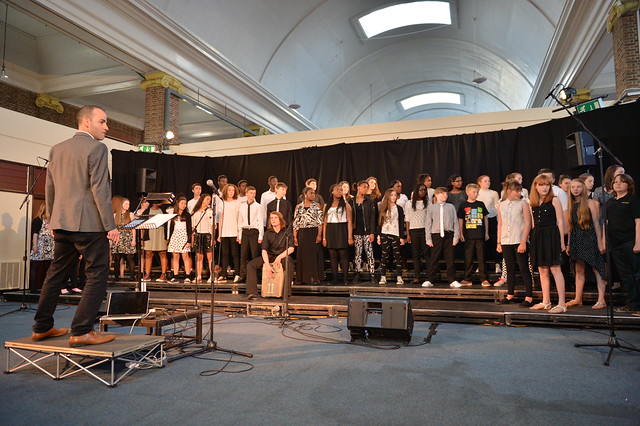 RM19, Thurrock’s vocal group for 11 to 25-year-olds, have created a brand new work inspired by themes of the Verdi Requiem. The piece - entitled A Little Thing Called Life - will be performed at the FUSED Festival at High House Production Park on Saturday 5 July.

The group of over 70 young singers led by Artistic Director Dominic Peckham perform a wide variety of music, from classical and operatic repertoire to pop, hip-hop and gospel.

The group started work on A Little Thing Called Life in January. Led by composer Nick Jones and lyricist and rapper Shay D, they took themes from Verdi's Requiem as inspiration, looking at personal reactions to loss, grief and conflict.

‘Creating art with young people gives them the chance to fully explore their creativity, take daring risks, try new things and know that everybody’s ideas and opinions are as valid as the next person’s. The freedom, support and encouragement that they are given allows their individual personalities and creativities to truly flourish,’ says Nick.

‘In one of the first devising sessions with RM19 we asked them the question “If you had the opportunity to tell the World one thing, what would it be?”. This question sparked conversation about what the group are passionate about and how they might convey this to an audience through words and music.’

Since the first brain-storming sessions at the start of the year, RM19 have composed and rehearsed the music, developed the staging with Jette Parker Young Artist Greg Eldridge, and designed costumes and props with Ruth Paton.

‘I am really enjoying having this team of 70 as my co-designers,’ says Ruth. ‘Watching RM19 rehearsing their new song cycle is like uncovering a colony of ants. The creative power of the group is thrilling, as is the path and course of each individual. For example, when devising staging, the group identified a scene where they felt some sort of body painting would help to express a notion of being a tribe and togetherness. We explored the idea of using hand-prints and different ways of printing onto cloth, as well as live body-painting.’

In addition to creating original music, design and drama, RM19 have planned the stage management behind the production, and developed a social media marketing strategy to document the process of staging the work.

A Little Thing Called Life will be staged at 7.30pm on Saturday 5 July as part of FUSED Festival, a three-day festival of concerts, workshops, exhibitions and activities at the High House Production Park in Thurrock. Tickets are still available.

The festival includes a performance of the Verdi Requiem, for which The Royal Opera House Thurrock Community Chorus and Brighton Festival Chorus will join forces with Orchestre de Picardie and L’Orchestre Symphonique de Bretagne, conducted by Arie van Beek.  Find out more.