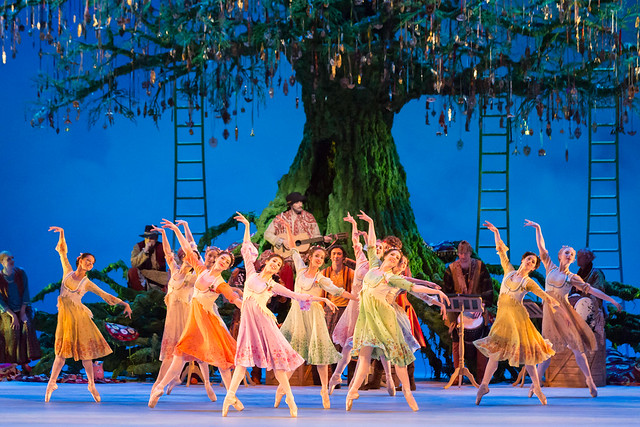 Dancers of The Royal Ballet in Act II of The Winter’s Tale © ROH/Johan Persson, 2014

Kevin O’Hare, Director of The Royal Ballet, has made the following promotions for the forthcoming 2014/15 Season.

The Royal Ballet welcomes five dancers to the Company for the 2014/15 Season as part of the new Aud Jebsen Young Dancers Programme. The programme provides an opportunity for up to six recently graduated dancers to receive a year’s contract to work alongside the corps de ballet of The Royal Ballet.  In addition the dancers will be offered mentoring and coaching and have the opportunity to perform with the Company. This year’s Aud Jebsen Young Dancers are Grace Blundell and Grace Horler, both from The Royal Ballet School, Ashley Scott and Ashleigh McKimmie from English National Ballet School and Maria Barroso from Semperoper Ballet, Dresden.

David Navarro Yudes joins the Company as a Prix de Lausanne Dancer for the 2014/15 Season.

Soloist Iohna Loots left the Company mid-season, and Soloist Kenta Kura retires from the Company after 17 years to take up a new appointment as Boys’ Artistic Teacher at White Lodge, the Royal Ballet Junior School. Kenta is a graduate of The Royal Ballet School's Professional Dancer’s Teachers Course (PDTC).

First Artist Leanne Cope will take a sabbatical for the 2014/15 Season to play the part of Lise Dassin in An American in Paris, directed and choreographed by Christopher Wheeldon, Artistic Associate of The Royal Ballet. An American in Paris receives its world premiere in December at the Théâtre du Châtelet, Paris and transfers to Broadway in spring 2015.