Plácido Domingo receives the Freedom of the City of London 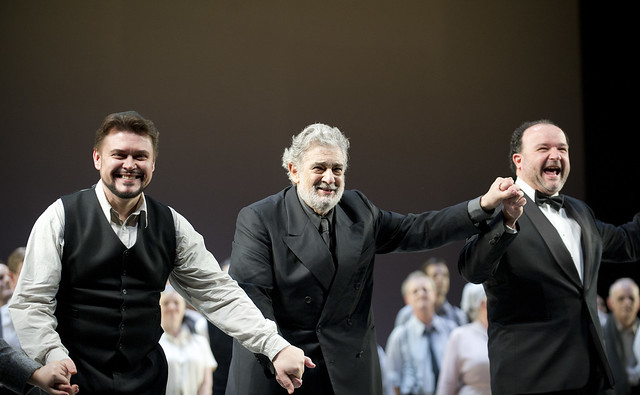 Plácido Domingo was honoured by the City of London Corporation today, in a ceremony held at the Lord Mayor’s official residence, The Mansion House. Last night was the first of four appearance at the Royal Opera House by Domingo in the title role of Giuseppe Verdi’s Nabucco.

Domingo’s performance as Nabucco is his 142nd operatic role in an illustrious career that began in 1959, when he was 18 years old.  Domingo has lately performed baritone as well as tenor roles in addition to conducting opera performances.

Speaking from Los Angeles, ahead of preparations for his performance in Nabucco at the Royal Opera House, Plácido Domingo said:

'It is an honour and a privilege to be given the Freedom of the City of London. I am delighted to be in the prestigious company of J. K. Rowling, Sir Michael Caine and my dear friend and colleague, the late Luciano Pavarotti, among various other much-admired and well-respected Freemen.

I am blessed to have amassed and nurtured an enduring relationship with London and its wonderfully cultivated audience for more than 42 years.

'I am proud of having once called Chelsea a home, and having embedded so much of my history here through singing over 200 opera performances of over 20 roles at the Royal Opera House, and of having done numerous full opera recordings at Walthamstow Recording Studios. I am now filled with emotion and gratitude.'

'The Freedom of the City of London is a very special and ancient tradition, bestowed to recognize remarkable contribution to the life of London and our global community.  We are honoured to welcome Plácido Domingo to join the fellowship of men and women who have been recognised by the City of London as being at the forefront of business, politics, sport and the arts.'

Plácido Domingo was nominated for the Freedom by Alderman Roger Gifford, Lord Mayor of the City of London, and Alderman Dr Andrew Parmley, both of whom are members of the Worshipful Company of Musicians, one of the City’s historic livery companies.