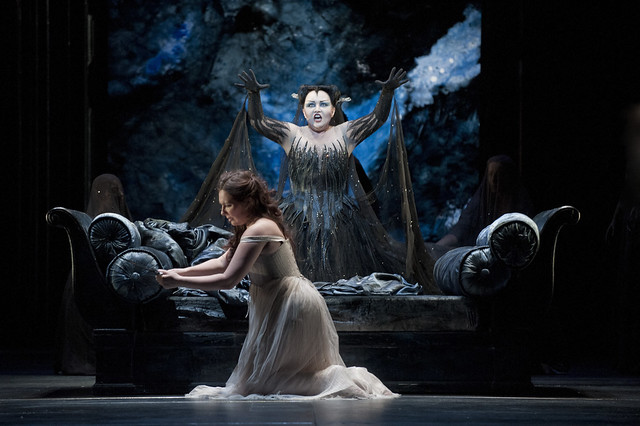 We often call Mozart’s Die Zauberflöte (The Magic Flute) a ‘Masonic opera’ – but ‘magic opera’ is just as appropriate. Mozart’s librettist Emanuel Schikaneder took much of his inspiration and several characters from Christoph Martin Wieland’s fairytale collection Dschinnistan. It wasn’t the first time Schikaneder had worked on a fairytale opera, and the sub-genre of opéra féerie had been thriving in France since 1771. But Die Zauberflöte is arguably the first masterpiece of the genre – and it heralded a growing interest in fairytales and magic as operatic subjects.

Charles Perrault’s L’Histoire ou contes de temps passés launched a fairytale craze in France upon its publication in 1697. From the late 18th century various composers wrote operas based on Perrault’s stories but, visually spectacular though they were, they have not remained in the repertory. Offenbach’s hilarious 1870s operettas Le Voyage dans la lune and Le Roi Carotte, parodies of the fairytale genre, have had more success. But perhaps the most effective French fairytale opera is Massenet’s Cendrillon (Cinderella), which combines humour with vocal virtuosity, sparkling ballets and romantic lyricism. Dukas, meanwhile, brought a touch of feminism to the genre with his Ariane et Barbe-Bleue.

19th-century German composers were particularly drawn to magical tales. A folktale about a hunter who makes a pact with the devil inspired Weber’s hit Der Freischütz, with its terrifying ‘Wolf’s Glen' scene. Like Mozart, Weber looked to Wieland for his final opera Oberon, a superb theatrical spectacle that includes spells, pirates, mermaids and villainous Arabian potentates. Even myth-loving Wagner was not immune to fairytales: his first opera Die Feen depicts the love between a mortal king and a fairy princess, and Siegfried was partly inspired by the Brothers Grimm’s ‘The Story of a Boy Who Went Forth to Learn Fear’. Later on, Wagner’s erstwhile assistant Humperdinck shot to fame with Hänsel und Gretel, adapting one of the Grimms’ most popular tales. Humperdinck’s other operatic masterpiece was also inspired by a fairytale (this time invented by his librettist Elsa Bernstein-Porges): the dark, exquisite Königskinder.

Russia’s rich folklore fuelled the work of many 19th-century Russian composers. Glinka led the way with Ruslan and Lyudmila, an exotic odyssey featuring a knight on a quest to save his bride. But it was Rimsky-Korsakov who was the king of the genre – his seven fairytale operas include the farcical The Golden Cockerel and the epic, mystical The Legend of the Invisible City of Kitezh and the Maiden Fevroniya. Rimsky-Korsakov’s pupils Stravinsky and Prokofiev carried on the tradition, with Le Rossignol (to a story by Hans Christian Andersen) and the satirical L’Amour des trois oranges respectively.

Fairytale opera also thrived in Central Europe. Dvořák’s Rusalka is a particularly tragic take on the genre, its beautiful melancholic music reflecting the water nymph Rusalka’s desperate attempts to win a soul and her beloved prince. But Dvořák also brought robust comedy to fairytale opera in The Devil and Kate, about a bossy girl who outwits a clueless devil. Bartók provided a dark, psychological interpretation of ‘Bluebeard’ with Bluebeard’s Castle. On the other hand, examples of Italian fairytale opera are rare – the few exceptions include Rossini’s La Cenerentola, which focuses more on morals than magic, and Puccini’s Turandot, loosely based on a Persian fairytale.

Die Zauberflöte’s most direct descendent is Richard Strauss’s Die Frau ohne Schatten, which Strauss and his librettist Hugo von Hofmannsthal regarded as their version of Mozart and Schikaneder’s masterpiece. The works have many parallels, including the fantastical Eastern setting, the trials endured by two couples (one noble, one humble) and the radiant finales praising the power of love. Above all, both achieve the full potential of fairytale opera: to use a magical setting to tell a moving, profound and very human story.