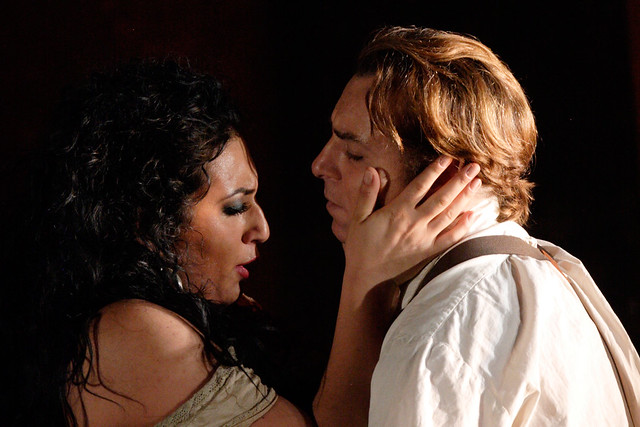 Don Giovanni is a serial philanderer and a murderer. But he still appeals, largely because of the charm with which he carries out his multiple seductions. When he gently woos Zerlina in ‘Là ci darem la mano’ or serenades a servant girl in 'Deh, vieni alla finestra', we’re as likely to be won over as the women he charms. He's far from being the only operatic character to ooze charisma from every pore, however...

With a seduction scene taking up almost all of Act III, Gounod’s Faust is perhaps the most patient of operatic lovers. He serenades Marguerite with the ardent ‘Salut, demeure, chaste et pure’, and then leaves her a box of jewels – provided for him by his devilish cohort, Méphistophélès. Alone, Marguerite expresses breathless delight in the flamboyant ‘Jewel Song’. Méphistophélès contrives a meeting for Faust and Marguerite and there follows a quartet where Marguerite’s tender, serene music and Faust’s fervent lyricism are contrasted with the bawdy patter of Méphistophélès and Marguerite’s neighbour Marthe. Finally alone with Marguerite, Faust radiantly praises love and the beauty of the night in 'O nuit d'amour'. Marguerite initially responds in kind, but, having a sudden premonition of evil, breaks away, to the mockery of Méphistophélès. But despite her misgivings Marguerite cannot resist her wooer, and she passionately sings of her love for Faust, soaring to a top C as Faust calls out to her. She beckons him inside to a sweeping romantic theme in the orchestra – while Méphistophélès laughs sardonically.

Manon has abandoned her young lover Des Grieux for a luxurious life as a kept woman. But on learning that Des Grieux is about to enter the priesthood, she hurries to Saint-Sulpice to win him back. Des Grieux has the upper hand for the first part of their dialogue: he angrily reproaches Manon, while she begs for forgiveness in a series of  broken phrases. But then Manon delivers her masterstroke. To a gorgeous lyrical melody accompanied by delicate strings she asks Des Grieux ‘N’est-ce plus ma main que cette main presse?’ (Is this not my hand that caresses this hand?). Des Grieux struggles to resist, but soon Manon’s music dominates his. The duet grows ever more passionate, until Des Grieux declares: ‘ma vie est dans ton coeur!’ (my life is in your heart) and abandons the priesthood to return to Manon.

The ageless Kundry is condemned to obey the evil Klingsor, who commands her to corrupt the ‘pure fool’ Parsifal by seducing him. In a lulling melody with shimmering orchestral accompaniment, Kundry tells Parsifal of how she watched him grow up, and how his mother loved him and suffered when Parsifal disappeared. Parsifal is hypnotized by Kundry and overcome with grief at his mother’s death. Kundry urges him to experience the bliss his parents knew, and to sensual surging in the orchestra kisses him passionately. But Parsifal suddenly remembers the suffering of Amfortas, who succumbed to a woman's charms, was horribly wounded as a result, and now lives in constant agony. With his sudden understanding of Amfortas's pain, Parsifal is able to resist Kundry, despite her increasingly frantic pleas and curses. Through his resolve Parsifal saves both himself and Kundry, and destroys Klingsor's evil realm – so becoming one of opera's very rare abstinent heroes.

Carmen is courted by many men, but wants the only one who seems uninterested – Don José. When she is arrested and Don José ordered to guard her, she seizes her chance. To the sensual Spanish rhythms of a Séguidille, she sings of how she and her lover will enjoy an evening of pleasure. Don José is initially cold and abrupt, but when Carmen, to a mixture of the Séguidille and a new, passionate melody, sings teasingly of how she will love him, he cannot resist, taking up her music. Carmen celebrates her victory in a final, triumphant reiteration of the Séguidille.

What are your favourite operatic seduction scenes?

Don Giovanni runs 1–24 February 2014. A small number of tickets are still available. The production will be broadcast live in cinemas around the world on 12 February. Find your nearest cinema.

The production is staged with the generous philanthropic support of David Hancock, Richard and Ginny Salter and The Royal Opera House Endowment Fund.