A quick guide to Giuseppe Verdi's opera about the rise and fall of the Doge of Genoa. 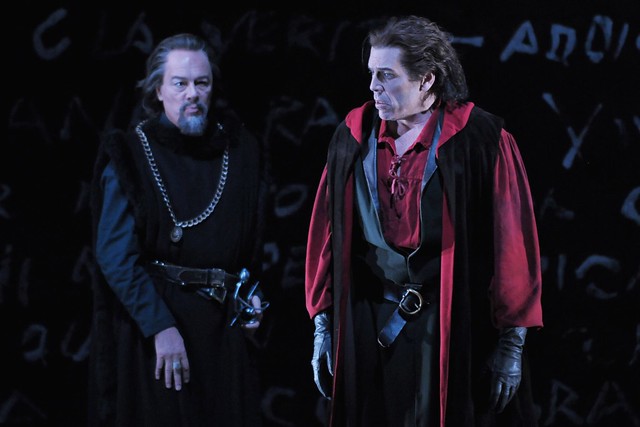 As a young man Simon Boccanegra suffers appalling misfortune: his lover Maria dies and their baby daughter disappears. Many years later Boccanegra, now Doge of Genoa, is reunited with his daughter. But their happiness is threatened by Boccanegra’s enemies, including the man who helped him win power.

Elijah Moshinsky’s production pays homage to Renaissance architecture and painting without aiming for total realism. The Council Chamber wall in Act I scene 2 contains a passage from The Chronicles of Genoa about the historical Boccanegra, written long after his death – Boccanegra is part of history even while alive. The sea is a dominant presence, represented with delicate blue lighting. Moshinsky envisages it as a metaphor for Boccanegra’s death at the end of the piece.

The first version of Simon Boccanegra had its world premiere in 1857 at La Fenice, Venice. The librettist was Verdi’s regular collaborator Francesco Maria Piave, the source a play by Antonio García Gutiérrez. The opera was not a success. Verdi’s publisher Ricordi suggested that the composer make some revisions, but Verdi was non-committal. Many years later, Ricordi introduced Verdi to Arrigo Boito, who was keen to work with the composer as a librettist. Verdi insisted that their first task should be to revise Boccanegra.

Verdi and Boito’s revisions of Simon Boccanegra included an entire new scene at the end of Act I, set in the Council Chamber, in which the Doge’s nobility is brought to the fore. The revised opera’s premiere at La Scala, Milan, was well received. Although it took Boccanegra time to become established in the repertory, it has steadily grown in popularity, particularly in recent years. In 2011 there were three new productions in Europe plus several revivals.

Verdi aimed for a plain, almost austere style in Simon Boccanegra, reflecting the harsh political world of Renaissance Genoa. The stark simplicity of much of the writing
makes the opera’s moments of tenderness – Boccanegra’s duet with Amelia in Act I, Boccanegra’s duet of reconciliation with Fiesco in Act III, the closing ensemble of the opera – all the more striking and poignant.

Simon Boccanegra runs from 27 June – 16 July. Tickets are still available.
The production is staged with generous philanthropic support from Mrs Susan A Olde OBE, Afiya and Timur Kuanyshev and the Verdi Syndicate.