Opera Essentials: Rise and Fall of the City of Mahagonny

Our quick guide to Kurt Weill and Bertolt Brecht's impassioned satire on consumerism. 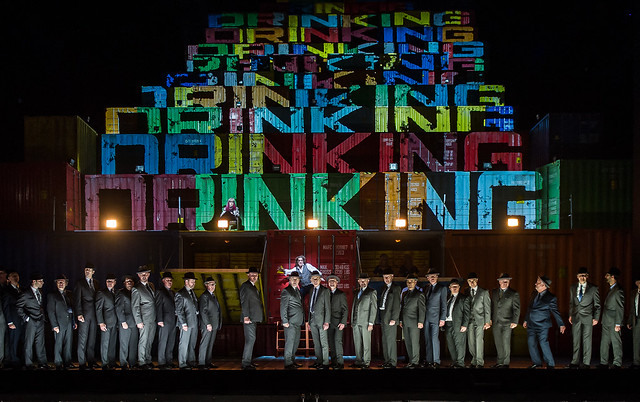 Production photo of Rise and Fall of the City of Mahagonny © ROH.Clive Barda 2015

The Story Begins…
Three criminals found the city of Mahagonny, to make easy money by selling pleasure. The new city attracts migrants including four lumberjacks from Alaska. But the criminals discover that it’s hard to keep customers satisfied…

A Collage of Styles
Weill embraces a wide range of styles in Rise and Fall of the City of Mahagonny, including jazz, cabaret and expressionism. There are various parodies of operatic styles as Weill and Brecht both adopt and mock the conventions of opera: Jimmy’s lament in his chains is modelled on Florestan’s prison aria in Fidelio, and his exposure of the corruption at the heart of Mahagonny is a sardonic variant on Wozzeck’s appeal for ‘Wir arme Leut’ (we poor folk) in Berg’s opera. Mahagonny also contains some beautiful lyric numbers, such as the famous ‘Alabama Song’.

An Inspired Collaboration
Bertolt Brecht, one of Europe’s greatest 20th-century playwrights, wrote the libretto for Mahagonny. Brecht and Weill collaborated on works including Die Dreigroschenoper (The Threepenny Opera), Happy End and Die sieben Todsünden (The Seven Deadly Sins), considered to be among Weill’s greatest achievements. However, the pair’s relationship was stormy, and they stopped working together in the mid-1930s, as Brecht became more influenced by Marxism.

A Popular Appeal
While Weill wrote Mahagonny for operatic performers, it was almost immediately sung by a wider range of singers. Weill’s wife Lotte Lenya (not a trained opera singer) immortalized some of the songs in her recordings and sang the role of Jenny in the opera’s Berlin premiere in 1931. More recently, the ‘Alabama Song’ has been sung in cover versions by artists and groups including The Doors, Ute Lemper and David Bowie.

Amerika
Brecht sited his pleasure city in ‘Amerika’; a fantasy land that reflected the dreams of his century. Mahagonny is a city where pidgin English is a lingua franca and where migrants can buy anything. Almost a century later, the opera exists in a global marketplace in which people and commodities cross continents. Today’s Mahagonny grows faster and reaches further, acting as a magnet for the wealthy and the needy from around the world.