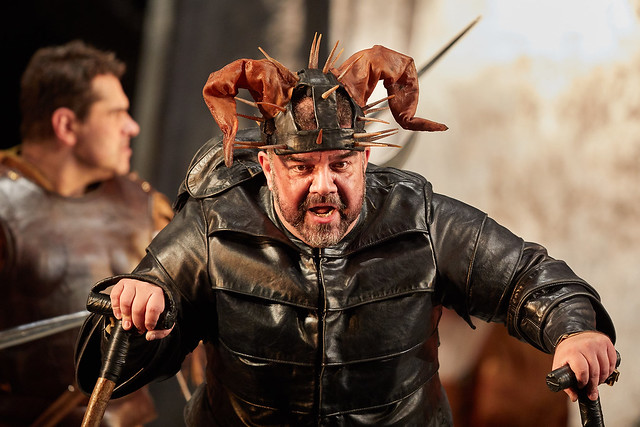 Featuring some of opera’s most memorable tunes and a cinematic plot of revenge, Rigoletto is one of the most popular works in the repertory today. So proud was its composer Giuseppe Verdi that he thought it his finest work to date.

Based on a controversial Victor Hugo play that was banned for 50 years, Rigoletto was a huge success when it was first staged in Venice, at the Teatro La Fenice in 1851. The opera toured widely and internationally, and even though Verdi had toned down Hugo’s violent plot, productions were heavily censored in certain Italian cities for at least a decade.

Set in a Renaissance court ruled by a debauched Duke, Rigoletto tells the story of a vengeful court jester and his daughter, the only person he cares about. Rigoletto’s master, the Duke of Mantua, is a notorious womanizer. When Rigoletto makes fun of a Count whose daughter has been seduced by the Duke, the Count curses Rigoletto. The curse begins to take effect as Rigoletto’s own daughter, Gilda falls in love with the Duke. Though Rigoletto is harsh and bitter at court – where his cutting put-downs have made him many enemies – he loves Gilda to obsession. When he finds out that she has become one of the Duke’s victims, he plots a desperate revenge.

Verdi’s music contains some wonderful episodes for the orchestra. The short, ominous prelude sets up the opera’s dominating tone of foreboding, while Act III’s vivid evocation of a storm is reminiscent of Beethoven’s storm music in his ‘Pastoral’ Symphony.

Rigoletto is also notable for the way Verdi brilliantly contrasts the different temperaments of his characters. He uses shifting musical styles to convey the Duke’s charisma and fickleness: from the elegance of his Act I aria ‘Questa o quella’ to the famous aria ‘La donna è mobile’, a catchy, popular tune which has re-appeared many times in films and adverts. So sure was Verdi of the tune’s potential that, for fear of a premature leak, he forbade his cast from singing or whistling the tune in public before the premiere.

Other highlights of the score include a sublimely delicate aria for Gilda – 'Caro nome' – and her two great duets with Rigoletto: in Act I, when he tells her of his love for her dead mother and in Act II, when he comforts her after her seduction by the Duke. There’s also a fantastic quartet in Act III as the plot builds to its devastating climax.

David McVicar’s engrossing Royal Opera production of Rigoletto is unflinching in its depiction of the corruption at the heart of the court of Mantua. The lavishly-dressed Duke and courtiers happily engage in a brutal orgy in Act I. Rigoletto, dressed to suggest a cockroach, mocks the Duke’s victims and enemies, only to have them viciously turn on him in Act II. The indulgent life at court contrasts with the shabbiness of Rigoletto’s house, where little details such as potted flowers show Gilda’s efforts to make a home for herself and her father. In Act III the squalor of Sparafucile’s inn (a spectacular two-level set) shows the depths to which Rigoletto has fallen in his search for revenge. Gilda’s innocence – she is symbolically dressed in white until Act III – contrasts with the corruption and violence around her.

If you liked Rigoletto, why not try...