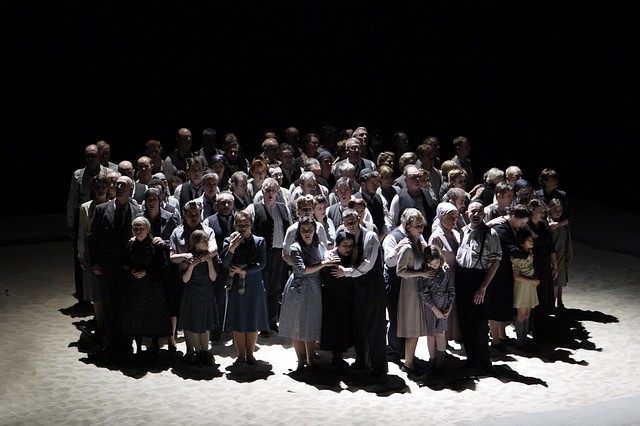 War rages between the Hebrews and the Babylonians. Will the Babylonian king Nabucco and his vengeful adopted daughter Abigaille destroy the Hebrews? Or will their lust for power turn them against each other?

In Nabucco, Verdi chose to focus his attention on the chorus, and on the most troubled or fanatical characters – the obsessive Abigaille, the headstrong Nabucco and the commanding Zaccaria – keeping the lovers Ismaele and Fenena as smaller roles. Musical highlights include Abigaille’s virtuoso ‘Salgo già del trono aurato’ in Part II, Zaccaria’s Part II prayer ‘Tu sol labbro’, with its accompaniment of six cellos, and the chorus of Hebrew slaves in Part III, ‘Va pensiero’. This chorus became hugely popular and was sung as Verdi’s funeral procession passed through the streets of Milan in 1901.

Exile and the individual

Daniele Abbado’s production focusses on themes of exile, humanity and mankind’s preoccupation with the nature of God. The chorus play a key role in each act, with every chorus member very much an individual. Luca Scarzella’s video projections vividly depict the characters’ troubled psychological states.

Verdi was offered Temistocle Solera’s libretto for Nabucco by the management of La Scala, Milan, in 1841; the composer Otto Nicolai had already rejected it. Verdi was so struck with the words for the chorus ‘Va pensiero’ that he stayed up the whole night re-reading the libretto many times.

Nabucco was Verdi’s third opera, and his first to be widely acclaimed. Following the premiere of the opera at La Scala on 9 March 1842, Verdi was hailed as one of the leading Italian composers of his day. The composer Donizetti was particularly admiring and described the opera as ‘beautiful, beautiful!’. Years later Verdi wrote to a friend that ‘With Nabucco my career can be said to have begun’. It was also through Nabucco that Verdi met Giuseppina Strepponi, who sang the role of Abigaille at the premiere and eventually became Verdi’s second wife.