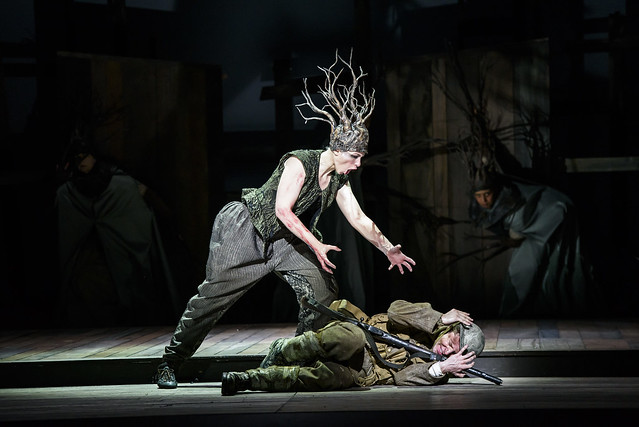 Alexandra Deshorties (Queen of the Woods) and Andrew Bidlack (Private John Ball) in In Parenthesis © WNO 2016. Photograph by Bill Cooper

Private John Ball and his platoon of Royal Welch Fusiliers travel from Southampton to France. Throughout the journey John experiences increasingly nightmarish visions. The platoon receives orders to join the Battle of the Somme, and find themselves taking part in the assault on Mametz Wood. At dawn, a chorus of dryads are heard from within the forest – do they bring death or rebirth?

Inspired by the work of a soldier poet

The opera In Parenthesis is based on the epic prose-poem of the same name by Welsh painter and poet David Jones – acclaimed by T.S. Eliot on its 1937 publication as ‘a work of genius’. Jones studied at Camberwell School of Arts and Crafts before the outbreak of World War I interrupted his studies. He enlisted as a private with the London Welsh Battalion of the Royal Welch Fusiliers and went on to survive the battles of Mametz Wood and Ypres. His horrific wartime experiences fed into In Parenthesis, though Jones did not intend it solely ‘as a “War Book”… I should prefer it to be about a good kind of peace’.

Honed for the operatic stage

Librettists David Antrobus and Emma Jenkins originally intended to adapt In Parenthesis as a play – but as work progressed they found the poem’s intensity made it ‘perfect for the bold conceptual medium of opera’.

'It is so musical, so mellifluous, so evocative of a textured soundscape that we were convinced this would be a gift to any composer’, say the creative team. Antrobus and Jenkins carefully drew out from Jones’s dense and highly allusive writing a simpler thread that would work onstage, ultimately focussing on Jones’s alter ego in the poem, Private John Ball: ‘Ball is our Orpheus descending into the Wasteland of war and emerging miraculously alive after an ordeal that should have ended in certain death.’

Composer Iain Bell is best known for his vocal music, acclaimed for its colour and nuance across a variety of genres. In his previous operas, A Christmas Carol (with Simon Callow) and The Harlot’s Progress (with Diana Damrau), Bell collaborated closely with the librettists on the text. In Parenthesis was in some ways a reversal of that process, as Bell started with the finished libretto – but he still immersed himself in the text, working extensively with Antrobus and Jenkins: ‘only then was I ready to start writing’. The finished score weaves in many influences – Welsh folk song, bel canto vocal writing ‘subverted into a contemporary canvas’, an inventive palette of orchestral effects for Ball’s visions and extensive writing for WNO’s brilliant chorus – in reflection of Jones’s rich imagery and language.

In Parenthesis is part of 14–18 NOW, a programme of cultural commissions to mark the centenary of World War I. The opera’s 2016 premiere coincides with the anniversary of the Battle of the Somme, in which Jones fought and where he lost so many of his comrades, commemorated in In Parenthesis. 2016 also marks the 70th anniversary of Welsh National Opera’s first production – although the company was first conceived of in 1943, when the nation was in the grip of another war. David Pountney, Artistic Director of WNO and director of In Parenthesis, pays tribute to the committee of Welsh amateur musicians who sought ‘to forge a cultural initiative that explicitly embraced European culture as a whole’.

The production was commissioned by the Nicholas John Trust, with 14-18 NOW: WW1 Centenary Art Commissions, supported by the National Lottery through the Heritage Lottery Fund and Arts Council England and by the Department for Culture Media and Sport.