Our quick introduction to Rossini’s final masterpiece, which contains some of the composer's most inspired music. 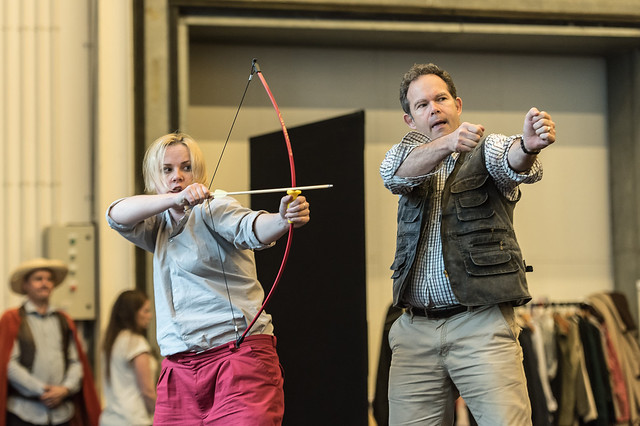 Sofia Fomina as Jemmy and Gerald Finley as Guillaume Tell in rehearsal for Guillaume Tell, The Royal Opera © 2015 ROH. Photograph by Clive Barda

The Story Begins…
Switzerland is suffering under increasingly repressive Austrian rule. The heroic Guillaume Tell and his confederates Arnold and Walter vow to defeat the Austrians and bring peace to their country. But will they succeed, or will Tell fall into the hands of the tyrannical governor Gesler?

Musical Invention
Guillaume Tell contains some of Rossini’s most inspired music. The overture, with its cor anglais melody based on a Swiss folk tune and dramatic evocation of a storm, has long been famous as a concert piece. Other highlights include exquisite arias for the young patriot Arnold and his lover Mathilde, several magnificent choruses and the dramatic scene in Act III in which Tell is forced to shoot an apple placed on his son’s head.

Rossini’s Last Masterpiece
Guillaume Tell was Rossini’s final opera, written to a commission from the Paris Opéra. With its large-scale choruses and dances, virtuoso lead roles and dramatic plot, it is one of the first examples of French grand opera. Rossini had star singers at his disposal, who inspired the opera’s brilliant vocal writing. They included the tenor Adolphe Nourrit (who later created roles for Meyerbeer) as Arnold.

Homeland Under Threat
Damiano Michieletto’s production examines the theme of homelands and traditional cultures which fall under threat from tyrannical outsiders, with a particular emphasis on children growing up in a time of war. The production depicts Tell’s son Jemmy reading and dreaming about the historical Tell figure, and how Tell is under pressure to live up to the role expected of him, inspired by the myths of iconic past heroes. Nature acts as a metaphor for a community who are yearning to re-connect with their roots.

A Heroic Drama
Rossini based his opera on Friedrich Schiller’s final drama Wilhelm Tell, written in 1804. Wilhelm Tell had great success in Europe, and has continued to be regularly performed (though the Nazis banned it during World War II). The drama focusses on themes of particular interest to Rossini, such as political idealism and the psychology of parental relationships.