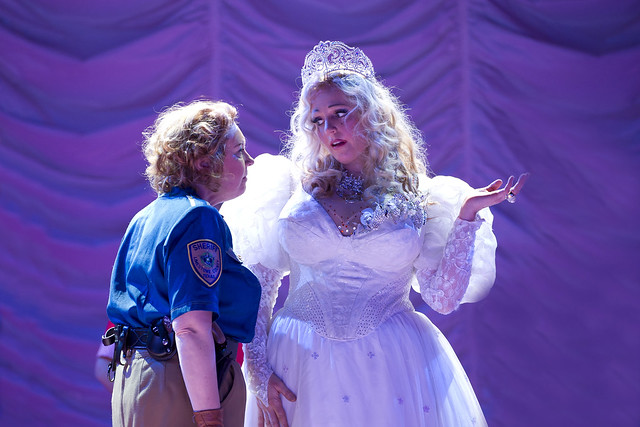 The Story Begins…
Former waitress Anna Nicole leaves her home town of Mexia, Texas, determined to become famous and adored. Breast enlargements and a meeting with an admirer help her to achieve her dream, but she soon discovers that success comes at a terrible price.

Who Was Anna Nicole?
Anna Nicole the opera was inspired by the life of Anna Nicole Smith, a former Playboy and glamour model and actress. At the age of 26 she married 89-year-old billionaire J. Howard Marshall. He died a year later, and Smith entered into a lengthy battle over her husband’s will with his family. She continued to work as an actress, model and TV personality, but suffered from weight gain and became addicted to prescription drugs. Anna Nicole Smith died of the cumulative effect of prescription drugs on 8 February 2007.

Trapped by the Media
Richard Jones’s production highlights the dark humour in Anna Nicole’s story and illustrates the intrusive nature of the media in today’s society. Anna Nicole may think she wants to become famous, but the strange camera monsters and sinister attendants that stalk her as she strives to achieve the ‘American dream’ invade and finally destroy her life.

A Royal Opera Commission
Anna Nicole was commissioned by The Royal Opera, and had its premiere at the Royal Opera House on 17 February 2011. Many of the original cast return for this 2014 revival, including Eva-Maria Westbroek as Anna Nicole. The production was televised, and released as a DVD in August 2011. Anna Nicole has also been performed in Dortmund, and was the last opera to be performed (in Jones’s production) by New York City Opera in 2014.

The first performance is a student-only production with tickets priced £1–£25. Find out more about ROH Students. ROH Students is generously made possible by the Bunting Family and Simon Robey.