One of the most striking choreographic devices John Cranko uses to tell Tatiana’s story. 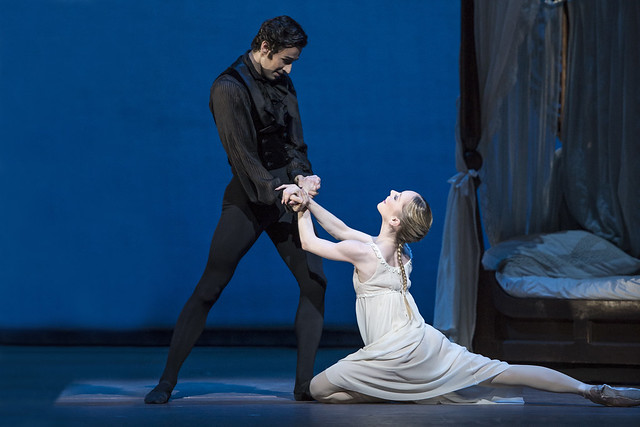 Valeri Hristov as Onegin and Sarah Lamb as Tatiana in Onegin, The Royal Ballet © ROH/Bill Cooper, 2013

Eugene Onegin by Alexander Pushkin is a seminal work of Russian literature, admired for its artful rhyming structure and for the author's explorations of the thoughts and desires of his protagonists. When choreographing Onegin as a ballet, John Cranko employed a distinctive dance language and inventive system of leitmotifs that – in the absence of Pushkin's omniscient narrator – create an insightful, compelling version of this heartbreaking tale.

Cranko's most ingenious addition is the mirror motif. In the ballet’s first scene, sisters Olga and Tatiana play an old folk game in which they each look into a mirror, hoping to catch sight of their true love. Olga sees the reflection of her fiancé, Lensky; while Tatiana spies Onegin – Lensky's dashing friend from St Petersburg. Cranko later expands upon this moment to give a vivid portrait of Tatiana's burgeoning desire for Onegin.

This famous 'Mirror' pas de deux occurs in scene 2, in Tatiana's bedroom. She has fallen head over heels for Onegin during their brief meeting in the garden, and sits down to write him a love letter. The nurse enters to put her to bed, but Tatiana is restless and returns to her desk, eventually slumping fast asleep where she’s sitting. Dreaming, she goes over to the large mirror at the back of the room. Suddenly, we see a vision of Onegin beside her reflection, which steps into the room as the stage is bathed in haunting blue light.

Staring in wonder at this figment of her imagination, Tatiana reverts to the girlish timidity she displayed in her first pas de deux with Onegin, soutenuing coyly away from his grasp. But he persists, and she – far bolder in her dreams than in reality – soon gives in to his touch, melting into his body in an arabesque par terre that matches his. Sensing her compliance, Onegin sweeps Tatiana off her feet, and she arches over his head in a daring lift before falling into his arms. He offers her one hand and then the other, which she grasps with confidence, allowing him to fling her into deep cambré.

As the Tchaikovsky score becomes increasingly ardent, so do Tatiana's reveries. The pair fly around the stage as he repeatedly grasps her waist and flings her in wide arcs around his body while she kicks one leg and then the other into high, reckless grands battements. In a moment of repose they return to the arabesque par terre from the beginning of the pas de deux, Onegin sensually stroking and kissing Tatiana’s arm. Then they're off again, he supporting her weight in a penchée, before lifting her off the ground as her feet quiver with ecstasy.

Transformed from the childlike teenager we saw at the beginning of the ballet, the dreaming Tatiana becomes increasingly flirtatious, scampering away from Onegin and spinning just out of his reach before eventually falling into his arms once more. As the pas de deux builds to a climax she soars through the air in ever-more acrobatic lifts – in arabesque, her arms open wide; balancing on one hand high above his head; in the splits, hanging upside-down over his shoulder – before prostrating herself at his feet in a fit of adoration and desire. Then, as quickly as it began, the dream is over.

The mirror motif will recur once more during the ballet – in the final scene, some ten years later. Tatiana – now Princess Gremin – has never forgotten Onegin, and has been disquieted by his appearance at her St Petersburg palace, and by a letter he has sent her. Reminiscing, she stares into her table mirror as her husband enters. She starts at his reflection – a tiny movement but one that, in the context of previous reflections, says so much.

The production is given with generous philanthropic support from Simon and Virginia Robertson, David Hancock, Lady Jarvis, Lindsay and Sarah Tomlinson, The Artists' Circle and The Royal Opera House Endowment Fund.