We look at the moving final duet between Verdi's heroine Violetta and her love Alfredo. 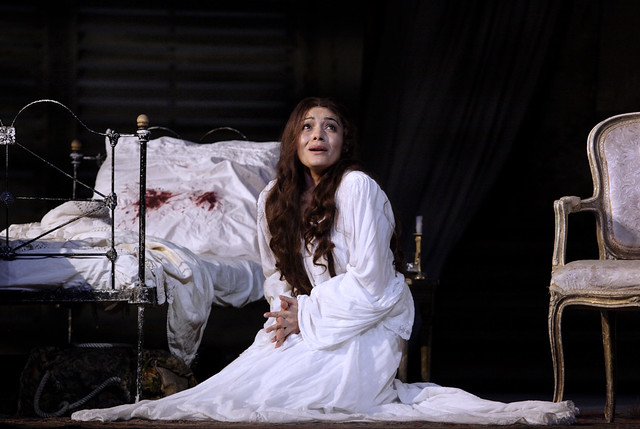 In La traviata Verdi created one of his greatest characters. Violetta Valéry – the fallen woman of the title – has won the hearts of audiences throughout the opera’s history. It is thanks to Violetta’s goodness, charm and most of all her likeableness that La traviata is one of Verdi’s most treasured operas – and one of his most heartbreaking.

Violetta’s Act III duet ‘Parigi, o cara’ ('Away from Paris, my dear') with her love Alfredo encapsulates her tragedy. In it they sing of their hope for the future and their adoration for each other, in music that recalls their joyful courtship in Act I. But Verdi makes sure we know how futile their hope is, and how powerless their love against Violetta's illness.

From the very opening of the opera we realize Violetta is sick. The party she throws in Act I is in part a celebration of her return to society after illness forced her away. Her first intimate encounter with Alfredo occurs when a sudden faint leaves her too weak to dance with her guests. But we, like Alfredo, are intoxicated by the brilliance of her singing, her witty rebuffs to his entreaties and her virtuoso aria ‘Sempre libera’ ('Always free').

Throughout Act III Verdi emphatically makes clear that exuberance is extinguished – even before the curtain rises, by returning for the first time to the mournful motif that opened the opera. Violetta’s first aria in the act, ‘Addio, del passato’ ('Farewell, dreams of the past') has limpid ornamentation a pathetic echo of her Act I fireworks, and pitiably spare accompaniment from pizzicato strings and a melancholy oboe. Verdi mercilessly drives home Violetta’s isolation by appending the aria to a raucous offstage Baccanale, heard from the street below, where the chorus sing with pagan abandon in weird minor-major music. It is carnival time in Paris, and all Violetta’s friends have abandoned her, caught up in their own hunt for pleasure.

Violetta has desperately awaited Alfredo’s arrival. When he finally arrives they are both overcome with excitement, gabbling short phrases almost on top of each other, urgently reaffirming their love. A brief, tender pianissimo section for the woodwind effects a key change from frenetic E major into mellow A flat major, referencing Verdi’s use throughout the opera of flat keys to depict Violetta and her love for Alfredo. There’s another pause before the soft pizzicato accompaniment of ‘Parigi, o cara’ begins.

The duet has a waltz-like rhythm, a lilting 3/8 signature that immediately signals its kinship with Violetta and Alfredo’s Act I duets, the Brindisi (drinking song) and ‘Un dì felice’ ('One happy day'). But this duet is softer, more tender. The short sighing phrases seem more like a lullaby than a dance, as Alfredo builds their dreams: ‘We’ll leave Paris… your health will come back, you will be the light of my life and the future will smile on us.’

As with their Act I duets, Violetta echoes Alfredo, but Verdi now marks her to sing ‘a mezza voce’ (with half voice) and ‘come in un sogno’ (as if in a dream). There are none of the giddy flourishes that characterized her singing in ‘Un dì felice’. Only a parody of that ornamentation comes in the duet’s second section, where Violetta introduces a theme of breathless staccato, anxious and painfully weak. Alfredo sings in yearning lyrical counterpoint until finally they come together for the closing phrases of the duet, singing closely together until the music fades away to nothing.

Through imitation and the singers' melodic unity Verdi expresses Violetta and Alfredo’s love. But he also embeds in the music two terrible truths: that Violetta is near death, and that Alfredo is too late. It’s done with genius, and tremendous sympathy – and makes the end, when it inevitably comes, all the more tragic.