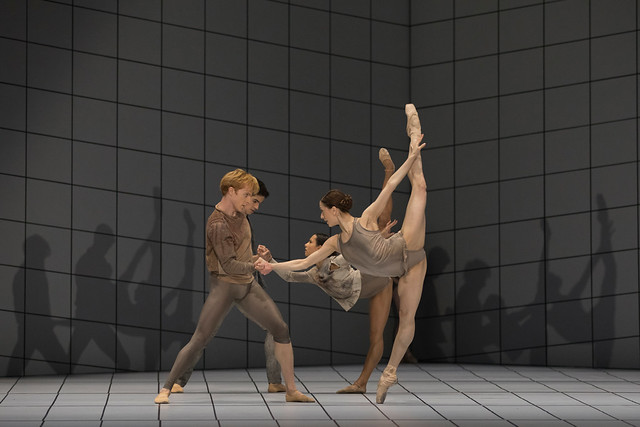 Dance makers have been inspired by any and all types of music, whether music written especially for the ballet – from Tchaikovsky and Debussy to Stravinsky and Prokofiev – or pre-existing music by Chopin, the Rolling Stones or anyone else. But the frequency with which choreographers have been drawn towards minimalist music is striking.

That said, it’s important to remember that the term ‘minimalism’ is not well defined, and has been controversial ever since it was coined in the 1960s. It was first used to refer to avant-garde artists and sculptors including Sol LeWitt and Donald Judd, but neither they nor the composers that came slightly later – Philip Glass, Steve Reich and their peers – have any time for the term at all. What’s more, their musical (and artistic) styles can be very contrasting, making it hard to talk about a ‘minimalist’ movement. ‘We were just swimming in the same soup’, Reich has said.

That soup has a few identifiable ingredients, though, which may be what has whetted the appetite of all those choreographers. First of all, much minimalist music (not all) makes use of repetition. Reich’s early It’s Gonna Rain loops a short fragment of a sound recording over and over again, allowing variations to emerge as two versions fall out of sync with each other. Wayne McGregor drew on this use of varied repetition in the first part of Multiverse, where two dancers performed subtly changing versions of the same choreography, in time with It’s Gonna Rain. With very different results, Jiří Kylián also uses the hypnotic, repetitive power of Reich’s music – Drumming, this time – in his 1989 work Falling Angels, in which eight women perform precisely identical (or almost identical) movements.

Contrastingly, some minimalist music has appealed to choreographers for its startling emotional punch. Henryk Górecki’s Symphony no. 3, for instance – the ‘Symphony of Sorrowful Songs’ – begins with a slow and searing setting of a 15th-century Marian lament. This piece, one of the best selling contemporary classical works ever in its 1992 recording on Nonesuch records, has been used as the basis for a number of dance works by choreographers including Krzysztof Pastor and Nacho Duato – and now Crystal Pite, who sets the first movement in her new creation for The Royal Ballet, Flight Pattern.

On the same programme is Christopher Wheeldon’s After the Rain, which uses two pieces by Arvo Pärt. The famous concluding pas de deux is set to his Spiegel im Spiegel, a piece of luminous and emotionally affecting simplicity. Alastair Marriott has also choreographed to Pärt for The Royal Ballet, using four of his pieces in Connectome.

Composers of minimalist music have also written a great many works expressly to be choreographed – from Reich’s Runner, commissioned to be the second part of Multiverse, to Glass’s Les Enfants Terribles, a ‘dance-opera spectacle’ from 1996. Max Richter can’t be easily categorized as a minimalist, drawing as he does on an eclectic range of influences, but those aspects of his music which recall composers such as Glass – the diatonic harmony, the repeating patterns – are a part of what makes his music so perfect to dance to, as his Royal Ballet works Infra and Woolf Works show.

There’s very little that connects a piece like Spiegel im Spiegel to something like It’s Gonna Rain – the use of repetition, albeit in very different ways, is perhaps the only connection. And the dance works that this varied music has inspired are just as diverse. For a number of reasons, so-called ‘minimalist’ music has shown itself to be choreographers’ best friend… over and over again.

The production is given with generous philanthropic support from Ian and Tina Taylor and The Taylor Family Foundation, Richard and Delia Baker and Sue Butcher (Flight Pattern) and Kenneth and Susan Green (After the Rain).