The broadcaster and former politician's account of a nail-biting climax to Royal Opera LIVE. 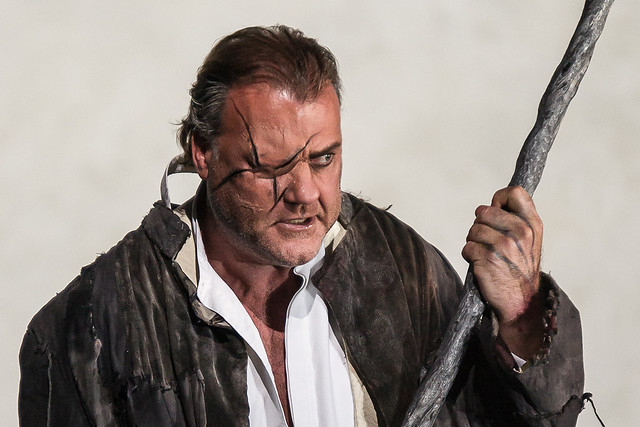 I thought that I knew a bit about opera, and coming from politics I flattered myself I had little to learn about the pressures of live performance; but the Royal Opera House’s film of a behind-the-scenes view of the third act of Wagner’s Die Walküre opened my eyes to what nail-biting drama occurs just out of sight of the audience.

Keith Warner’s productions usually demand something close to the impossible.  When his team was told that its ideas for a Lohengrin at Bayreuth (involving a lake on stage) were impossible, because it would require the foundations of Wagner’s opera house to be excavated, the response was 'Get digging'.

For Die Walküre he needed a wall - two tons of it.  While the Walküre were fleeing Wotan, it was to move upstage; when the god caught up with them, it was to spin; and when he and Brünnhilde were left alone, it was to fly away.

The webcast revealed how, while the orchestra and war maidens belted it out, a truck dragged the wall upstage, positioning it with millimetric precision over a sturdy spindle that penetrated it from beneath the stage. A hydraulics operator in an eyrie high above the stage then made it rotate, precisely as Wotan, demonstrating godly will and might, appeared to push it.  Thereafter, black curtains dropped behind the wall to hide a team of stagehands toiling to attach the steel cables that would whisk its 2000 kilograms up into the fly tower.  But whenever the music and singing grew soft (yes, it does happen in Wagner!) they had to down tools, on instructions transmitted to their earpieces by deputy stage manager, Sarah Woodward.

She was the pivotal figure of the evening, an oasis of calm seated between warring gods in front of the wall, and deadline-stressed stage operatives behind it.  Following the music score she would prepare each department for its upcoming cue: 'Standby lights, smoke, wardrobe, props', and then with quaver-perfect precision, call 'Go!'. All evening I was wondering, how did such a young person learn so much about music and stagecraft, and develop such fathomless composure?  Might she fancy a stint controlling Britain's nuclear deterrent?

The greatest challenge of the evening fell to her boss, stage manager Adam Lawley, an Eric Cantona lookalike, but without any football field histrionics. Warner had set another challenge: in the brief moments that Bryn Terfel, playing Wotan, was offstage, a gas canister was to be fitted to his belt, and a hose fed down his sleeve, so that fire could appear in his hand: scooped, as it would appear, from a flame that like a child on a helter-skelter slid down a spiral trough (with the added difficulty, as Warner chirped in his live commentary, that the speed of the descent might extinguish it).

As Wotan approached his exit the canister/hose device would not function, and Adam set off to break it to Bryn that he would have to wing it.  At that moment the crew managed to light the contraption, and Wotan was hurriedly equipped.  The final adjustments were being completed as his cue arrived but the audience would know nothing of the crisis. Viewed from the auditorium, Wotan re-entered, as unflappable as a deity.

Watching in the quiet of my home, the tension was unbearable. I longed for the relative tranquillity of a full-blown political crisis.

Watch Act III of Die Walküre  on The Space with highlights from Royal Opera LIVE on our YouTube channel.