Puccini describes Cio-Cio-San’s vigil, as she desperately awaits the return of Pinkerton, with a chorus of ethereal beauty. 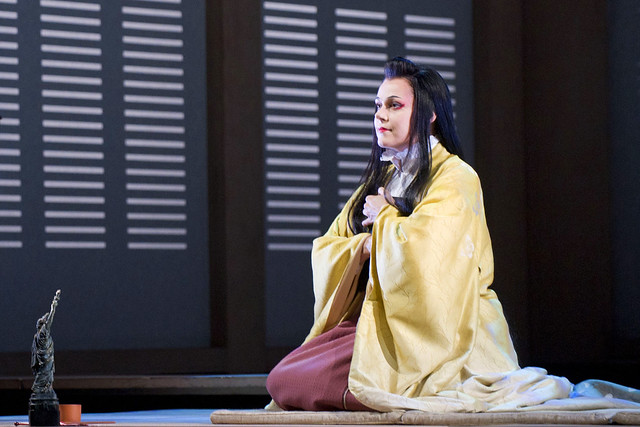 When Giacomo Puccini saw David Belasco’s play Madame Butterfly in London in 1900, he fell in love with the production. Belasco was a true man of the theatre, known for his spectacular stage effects. Madame Butterfly featured the heroine’s magnificent ‘all-night’ vigil for her husband Pinkerton. Butterfly sat on stage in silence for 14 minutes, while subtle shifts of light illustrated the passage from dusk to dawn – the first time, Belasco claimed, that electricity had been used for a poetic purpose. Puccini knew he would need to come up with music that was equally poetic for his operatic vigil.

He certainly succeeded. The ‘Humming Chorus’ has become one of the most famous of opera excerpts. It is often played over loudspeakers in Glover Garden, Nagasaki, where young lovers come (perhaps unwisely) to be photographed at a shrine dedicated to Butterfly. It’s also had some surprising reincarnations in film: in Heavenly Creatures (1994) it’s heard as two adolescent girls plan the murder that they hope will free them to love each other; and in M. Butterfly, partly inspired by Puccini’s opera, a French diplomat listens to the ‘Humming Chorus’ as he yearns for his (male) Chinese lover.

What makes this three-minute chorus so enchanting? There’s its musical beauty, but also its sense of calm, such a contrast to the passion of Act II. Cio-Cio-San (Butterfly) has been badly frightened by the US Consul Sharpless’s hints that Pinkerton has abandoned her: she would rather die than lose her husband’s love. So, when she spies Pinkerton’s ship in the harbour, she becomes manically excited and strews flowers round the house. She orders her maid Suzuki to dress her in her wedding gown, and declares that they and her child will make three small holes in their shoji (Japanese screen) and watch for Pinkerton. The rich musical textures become increasingly delicate as Cio-Cio-San, to tender melodic fragments in the strings and woodwind, takes up her place at the screen. Three pizzicato (plucked) notes on the cellos open the ‘Humming Chorus’, loosely based on a fragment from Sharpless’s attempt to read Pinkerton’s letter to Cio-Cio-San in Act II.

The unusual scoring of the chorus creates a striking contrast with its surroundings. Staccato flutes and muted, pianissimo pizzicato strings accompany the chorus of sopranos and tenors as they hum a long, arching melody in octaves. This melody, a rare example of an operatic vocalise (wordless song), is doubled by solo viola d’amore – an archaic instrument with a distinct sound, used only this once in the opera. Puccini creates a sense of repose by ensuring the vocal lines never move at the same time as the accompanying instrumentalists. The melody and its repetitive, lulling accompaniment are as simple as a lullaby. Precise stage directions state when moonlight illuminates the room, and when the baby and Suzuki fall asleep.

Later on, the textures briefly grow richer; the melody becomes wider ranging and the harmonies more adventurous. But after only a few phrases the opening hushed mood returns. The singers return to their initial vocalise, but in a fragmented form, as if they are growing drowsy. Then, to shimmering chords in the clarinets, horns and viola, and gentle figures in the harp, the vocal parts slow, rising gently to a pianissimo high B flat (not easy to hum!). The chorus ends in an ethereal B flat major chord.

The ‘Humming Chorus’ is a rare episode of calm in Cio-Cio-San’s tragic tale. The delicate, peaceful mood of these 50 bars makes the drama of Act III – when Cio-Cio-San’s illusions are destroyed forever – all the more poignant.

The production is a co-production with Gran Teatre del Liceu, Barcelona. It is sponsored by Coutts, with generous philanthropic support from Mr and Mrs Christopher W.T. Johnston and The Royal Opera House Endowment Fund.