Macbeth to be screened in cinemas on 29 July

All you need to know about Verdi's psychological thriller with rehearsal footage, interviews with the cast and features. 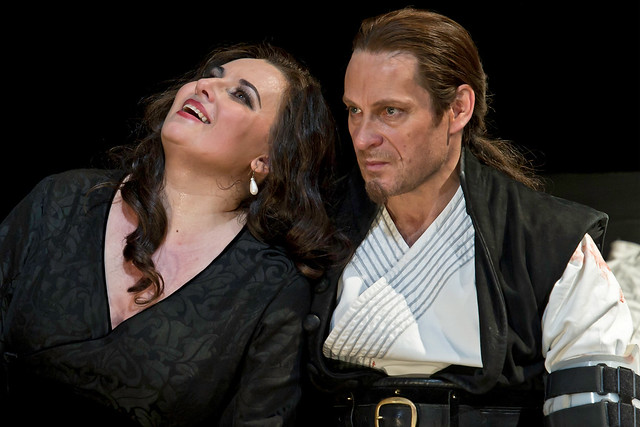 Audiences will have another chance to see Phyllida Lloyd’s Royal Opera production of Verdi’s Macbeth when it is screened in UK cinemas on Monday 29 July.

The production stars Simon Keenlyside making his role debut in the lead part and Liudmyla Monastryrska as the murderous Lady Macbeth.

When witches prophesize that Macbeth will become King of Scotland, he struggles with his conscience. The formidably ambitious Lady Macbeth suffers none of her husband's uncertainty and pursues the kingship with murderous intent.

'There is this friction between Macbeth and Lady Macbeth,’ says Simon Keenlyside when discussing the role of the ill-fated Macbeth, ‘this grinding irritation between them grown into something a lot worse because Lady Macbeth is endlessly needling’.

Watch an interview with Simon and The Royal Opera's Director of Music Antonio Pappano:

Despite never having seen Macbeth on stage, Verdi carefully preserved the drama Shakespeare’s original play and the opera was an instant success on its premiere in 1847. He subsequently made several revisions in 1865 after he had seen the play several times, creating a vivid adaptation that combines fantasy and politics.

A Shakespeare fanatic, Verdi drew inspiration from the great playwright throughout his career. Macbeth was the first of Verdi’s three Shakespearian operas. It was followed by Otello and then Falstaff, the latter based on the character from The Merry Wives of Windsor and King Henry IV.

Find out more about the connection between Verdi and Shakespeare.

Watch a stage and orchestra rehearsal for Macbeth with Antonio Pappano:

Verdi’s dramatic genius has been likened to that of Shakespeare himself; his expansive melodies, eerie silences and driving rhythms capture the powerful drama of Macbeth. He specified that the soprano in the role of Lady Macbeth should sing with ‘hard, stifled and dark’ tones in order to reflect ‘something devilish’ in her voice, prioritizing characterization and drama over beauty of tone.

Verdi was so focused on the drama of the piece that, on the opening night, he was still rehearsing the duet between the two leads, instructing them to sing more softly during the scene where they plot the murder of King Duncan.

Selected cinemas are also showing Macbeth on 30 and 31 July, and 12 August as well as 29 July. Find out full details of screenings.
The final Royal Opera House production screened as part of the Summer Cinema Season cinema will be The Royal Ballet’s La fille mal gardée on 5 August.