The Russian dancer talks about his career to date and about life with The Royal Ballet. 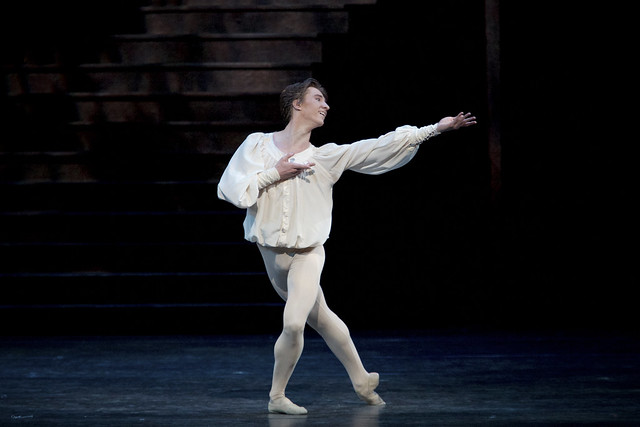 Vadim Muntagirov as Romeo in Romeo and Juliet, The Royal Ballet © 2015 ROH. Photograph by Alice Pennefather

The son of ballet dancers, Vadim Muntagirov grew up in Russia, with its deeply-rooted ballet tradition. Aged seven, he began dancing in his home city of Chelyabinsk before moving to Perm State Choreographic College two years later, an overnight-train journey away. It was tough living far from home, he recalls, but like many children in Russia, ‘we didn’t really have a choice because [ballet] was such a typical Russian discipline. Crazy, angry teachers were smacking you and you had to work 200%!’, Vadim explained at an ROH Insight.

It wasn’t until six years later, when he was 15, that Vadim realized he wanted to be a professional dancer. He entered the prestigious Prix de Lausanne competition in 2006, won a study scholarship and picked The Royal Ballet School in London, an opportunity he couldn’t refuse. ‘At Perm Ballet School it was very hard. We didn’t even have electricity plugs in our rooms.’ So despite being offered better accommodation at Perm, he moved to London to learn the English repertory.

‘It was completely different compared to Russia’, he says, ‘because in Russia we would have bigger jumps and concentrated on turning, but in England it’s more about the small technique’. The English tradition, built on the rich heritage of Frederick Ashton and Kenneth MacMillan, is known for its sharp and intricate footwork. ‘Russia is very famous for classical ballets, when you do pirouettes and jumps. But I think for every Russian dancer it’s a dream to dance MacMillan and Ashton ballets.’

Despite initially struggling with the speed required by his training, his first big break came right after graduation when he was offered a contract with English National Ballet. At ENB he was partnered with the Czech dancer Daria Klimentová, who retired in 2014. She extended her career because of him, but initially didn’t exactly jump with joy when she found out she had to dance with the recently graduated Vadim. ‘She just started crying’, he says. ‘But she faked it very well because in rehearsals she looked like she wanted to dance with me.’

Vadim moved quickly through the ranks of the Company, being promoted to lead principal three years later, in 2012. But the Russian dancer aspired for a new challenge. ‘With English National sometimes we performed just the one ballet for a very long time… It becomes a bit boring. Also you feel like you’re not moving forward.’ So in March 2014 he joined The Royal Ballet where, as a Principal, he gets to rehearse and perform as many as six works a day.

Romeo and Juliet is one of his favourites. Unlike such Russian classics as Swan Lake, ‘you don’t really dance for the public. You have Juliet and you’re dancing for her’. He also enjoys the excitement of performing his ‘best jumps’ in Don Quixote, something Russian-schooled dancers are well-trained for. But his biggest challenge is with Ashton’s ballets, not just because of the lighting-fast footwork. ‘In Ashton, you’re not just a ballet dancer; you’re also an actor. It’s easy to jump and look at the audience with no emotions, but it’s harder to jump and be excited.’

Vadim has been praised for his lyrical freshness and perfect technique and his talent has earned him comparisons with a young Rudolf Nureyev. But he confesses that ‘most of the time I’m quite unhappy with my shows’. One of his teachers once told him: ‘You shouldn’t be happy because otherwise you will never improve’. Judging from his huge success in London and beyond, such an approach appears to be paying off.

Vadim Muntagirov will perform in The Two Pigeons, The Nutcracker, Within the Golden Hour, The Winter’s Tale, Frankenstein and Giselle. Tickets are still available.