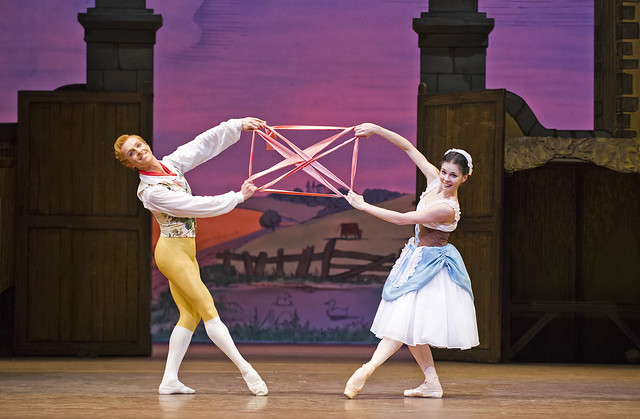 Frederick Ashton's Royal Ballet production of La Fille mal gardée (The Wayward Daughter) will be relayed live to cinemas across the world at 7.15pm BST on 5 May 2015.

La Fille mal gardée tells the story of Lise, the only daughter of Simone, a widow and owner of a prosperous farm. Lise loves Colas, a young farmer, but her mother has far more ambitious plans, and is determined that Lise should marry Alain, the son of a wealthy landowner.

The ballet is the oldest in the repertory, Ashton's production beingjust  one of hundreds of versions of the ballet staged since the original had its premiere in 1789. Find out more about the history of La Fille mal gardée.

In La Fille mal gardée, Frederick Ashton created an unmistakably English romantic comedy that evokes his beloved Suffolk. The production is laced with good humour and features a pastoral whirl of dancing chickens, grouchy guardians and a halfwit suitor. There's even a live pony on-stage!
Find out how Ashton evokes a sense of place through movement

Ashton was meticulous about his preparations for creating new productions. Hear Ballet Master Christopher Carr's memories into what it was like being in the rehearsal studio with Ashton.

The ballet contains some of Ashton's most virtuoso choreography with the youthful passion of Lise and Colas expressed in a series of energetic pas de deux. Chief among them is the pas de ruban (Ribbon Dance) a charming pas de deux that pays homage to the ballet's two-hundred-year history.

Find out more about our dance highlight, the Pas de ruban.

Other choreographic highlights include elements of national folk dancing, from a Lancashire clog dance to maypole dancing.

The production opened on 16 April 2015. Read audience reactions to the opening night and add your own review.

After the relay, we will publish a roundup of audience tweets, so share your thoughts with the hashtag #ROHfille