There are already at least 40 operatic adaptations of the Faust legend, so why has The Royal Opera commissioned two more? 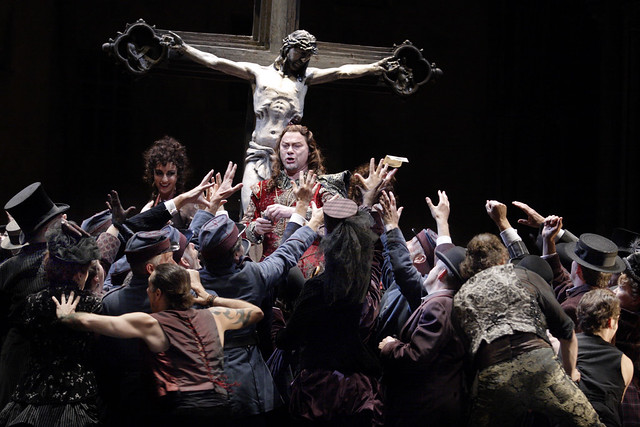 The long list of opera composers who have fallen under Mephistopheles's influence over the last 250 years includes Boito, Berlioz, Busoni, Schnittke, Schubert and Stravinsky. Perhaps the most famous operatic adaptation of all is Gounod's French grand opera based on the first part of Goethe's Faust. A hundred years ago this was one of the most popular titles in any opera company's repertory and is grand opera at its grandest. While no opera could possibly represent Goethe's epic masterpiece faithfully, accurate reflection of Goethe's play was never the aim of this opera. Instead it is a romantic, perfumed melodrama overflowing with pathos and sentiment and heavy doses of Grand Guignol and Gothick. It reflects Gounod's world far more than Goethe's.

The legend of the man who makes a pact with the devil is so rich that different aspects speak to each new generation. For example, a hundred years ago, Busoni was attracted by the myth as an exploration of modernist artistic creativity. So what is it about the myth that particularly speaks to us today? Is it Faust's dissatisfaction with the finite limits on human experience and perception? The moral vacuum of modernism and the depravity that emerges from a disconnection with the natural and the spiritual? Or the capacity for love and tragedy to conquer the tyranny of technology, science and rationalism?

With our Faustian Pack programme, we've commissioned two new operas inspired by the Faust legend that will be performed alongside our revival of David McVicar's production of Gounod's Faust in April. Composers Luke Bedford and Matthew Herbert have responded to the myth in completely different ways.

Matthew Herbert is a sound artist, composer and producer whose electronic sound work, as well as his provocations about how we hear, have created a unique niche and won him a following as one of the leading sound artists of our age. Matthew may be most familiar to ROH audiences through his work One Pig, which had its live premiere at the Royal Opera House as part of Deloitte Ignite 2011. His upcoming opera The Crackle explores the modernity inherent in the Faust legend; a story told by Goethe at the birth of industrial revolution in the face of enormous technological progress, which addresses the birth of mass-produced knowledge and information. Matthew's new work explores whether music itself can be seen as a Faustian protagonist - in the midst of a similar technological revolution - at risk of losing its soul.

Luke Bedford's opera Through His Teeth has a more tangential relationship to the myth. Working with playwright David Harrower he explores the nature of a controlling relationship in which a person's soul can be completely taken over by someone else. In their opera, the Mephistophelian pact gains its power through the psychology of Faustian figures whose entrapment is in their own mind rather than as a result of diabolical forces.

The Faust legend offers us a lens to see into Gounod's, Luke's and Matthew's imaginative worlds and so also offer a mirror within which to look back into our own.

Find out about the other events that form part of A Faustian Pack.

This article has been categorised Opera and tagged by Bejan Sheibani, by David McVicar, by Matthew Herbert, Faust, goethe, opera, Production, The Crackle, Through His Teeth