Lauretta’s lovely little aria is key in shaping the black comedy of Gianni Schicchi, the final opera in Puccini’s triptych. 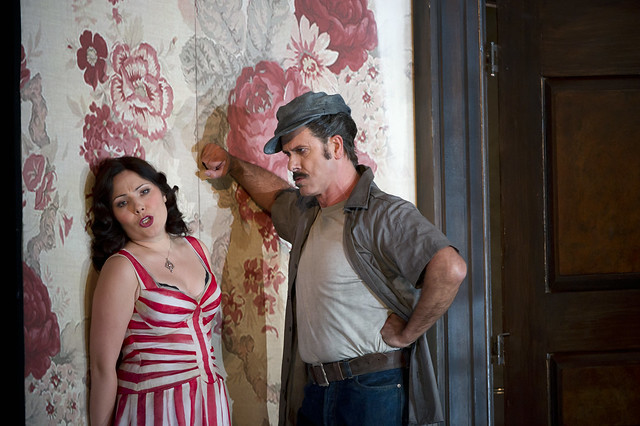 ‘O mio babbino caro’ is one of Puccini’s best loved arias – and small wonder, given its exquisite melodic beauty. But there’s more to the aria than just a lovely tune, especially when it’s placed in its original context in Gianni Schicchi, the third opera of Puccini’s triptych Il trittico. A rare formal aria in an opera primarily characterized by rapid, through-composed action, ‘O mio babbino caro’ serves a highly satisfying dramatic purpose.

Lauretta sings ‘O mio babbino caro’ to persuade her father Gianni Schicchi to help her and her boyfriend Rinuccio Donati. Rinuccio’s wealthy uncle Buoso Donati has recently died, leaving all his money to the local monastery. Rinuccio’s family, however, want secretly to alter his will in their favour. Rinuccio believes that his aunt Zita will allow him to marry Lauretta, despite her humble background, if Schicchi helps the Donatis in their scheme. However, Zita insults Schicchi as soon as he arrives; her rapid scolding and Schicchi’s scornful responses are in stark contrast to Lauretta and Rinuccio’s romantic avowals of devotion. Disgusted at the Donatis’ snobbery and greed, Schicchi tells them (three times) that he will do nothing for them: ‘Niente!’

The combative atmosphere evaporates as Lauretta steps forward to plead her case. The music shifts to a warm major key and a lilting 6/8 tempo. The luminous scoring of strings and rippling harp – perhaps depicting sunlight falling on Florence's River Arno – enhances the gentle mood. Doubled by high strings and woodwind, Lauretta sings in lyrical, soaring phrases, telling her father how she longs to get married. The lingering high note on ‘bello’ (handsome) suggests her love for Rinuccio, while the melody’s beauty and simplicity illustrates Lauretta’s tender, sincere nature.

Soon, Lauretta decides to put pressure on her father through gentle threats. The music of the second stanza begins identically to the first, but after four bars becomes more melancholy, with hints of minor-key harmonies, as Lauretta tells Schicchi that she will throw herself from the Ponte Vecchio if she can’t marry Rinuccio. She emphasizes her misery in the next, high-lying phrase, ‘mi struggo, e mi tormento’ (I suffer, I am tormented), before falling away in a melting diminuendo on the ensuing exclamation ‘O Dio, vorrei morir’ (O God, I want to die!). The music briefly hints at tragedy.

However, Lauretta is not naturally suicidal or despairing – the fact that her aria never becomes truly agitated reveals this – and ultimately she finishes not with threats but with another coaxing plea. She follows an orchestral reinstatement of her gentle opening melody, with a final tender appeal to Schicchi (‘Babbo pietà’ – Daddy, have pity!), soaring to a radiant high note before repeating her plea pianissimo at a lower pitch, unaccompanied. How can Schicchi resist?

Of course he can’t: it is Lauretta’s plea that persuades him first to help the Donatis, then to trick them out of a large slice of their inheritance – and the fact that Schicchi performs his crime purely to secure Lauretta and Rinuccio’s happiness ensures that we wholly sympathize with him. ‘O mio babbino caro’ is crucial in speeding Gianni Schicchi’s plot on its crazy, black-comic way, as well as providing an episode of beautiful melody. It is both musically and psychologically satisfying: no surprise, then, it has touched the hearts of so many.