How to Stage an Opera: Characterization in Idomeneo

By turning the screws on his unfortunate characters, director Martin Kušej offers a unique insight into their motivations and crises. 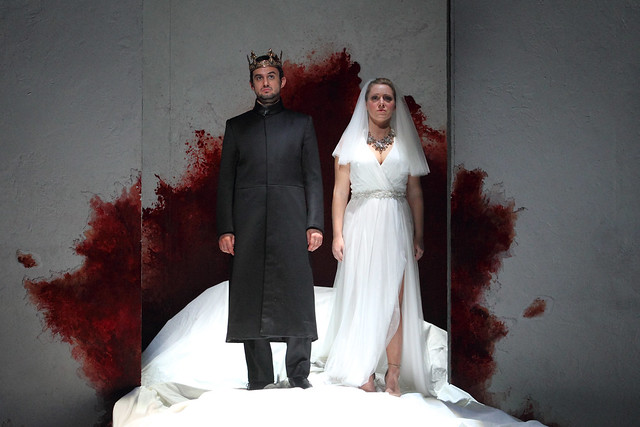 Our 'How to Stage an Opera' series offers different perspectives on the practicalities of staging an opera, from the initial research through to the final performance.

All of a director’s work on a production is likely to stem from the same kernel. But one of the easiest sections to separate from the whole is the director’s focus on the characters – what’s called the Personenregie. The work done with the singer-actors, to look at the motivations of the characters and find ways of intensifying their conflicts, is often interesting in its own right.

Mozart's Idomeneo is constructed around a particularly brilliant character portrait. The title character is a powerful king and mighty war hero. He is compelled by the highest force to commit an atrocity – to kill his son. He does not question or fight this command, but nor can he obey it. We see him terrified, cowardly, impotent. Ultimately, he is unable even to free himself; only further external intervention allows him formally to acknowledge that his power is already gone. Characters such as this invite reinterpretation.

Director Martin Kušej has spoken of how he was drawn to Idomeneo's agony: 'He’s a man of war, a man of power, someone quite sure in his conservative, patriarchal habits. And he’s falling apart completely. And when I feel something like that, I turn the screw as tight as I can.' In his Royal Opera production, Kušej applies a reading whereby Idomeneo is the complicit tool of an anti-democratic cult. The high force demanding the unnatural murder is not a god but a group of men who seek to maintain the status quo of the tyrannical, xenophobic state Idomeneo originally engendered. While the reading is not without its problems, the recasting of the characters and their conflicts in many ways efficiently turns the screw. 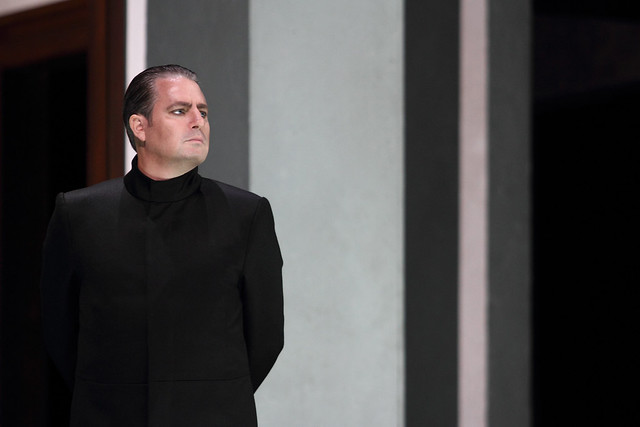 Kušej's Idomeneo is loaded with woe. The imperative to kill Idamante is no longer solely external; he is compelled also by his own brutal instinct for control, and his anger at Idamante's mercy towards the Trojan captives. His impotence is coupled with self-loathing for the weakness of his compassionate heart. He is a fragile man, even more so than the king of Varesco's libretto. As violence breaks out among his people he longs to express his culpability, but cannot let his weakness show. His final aria 'Torna la pace al legge', in which he gives his blessing to the new king, is made no longer a serene retirement but the delusional expression of a figure completely without hope.

The director’s focus on character isn’t just restricted to exploring the inner workings of Idomeneo’s mind, however. Ilia, the rescued Trojan princess, loves Idamante. But Kušej also makes sure that we see her awareness of her own vulnerability. She is a prisoner of war in all but name; her home is destroyed, and she is entirely dependent on the kindness of Idamante and his father. Her Act II aria 'Se il padre perdei' becomes an attempt to ingratiate herself with the tyrannical king while also making her new status in court as Idamante's love clear. Beneath her charm runs fear and disgust; we sense a desperation in the da capo repeat of the aria.

There are more examples: the oddly inflated role of Arbace becomes an intriguing figure – what could justify his extreme devotion to Idomeneo? Elettra – like Ilia a stranger in Crete – senses the danger of her position during this regime change; already delirious from her hideous past, she is pushed to an even more extreme anxiety. Idamante is a boy who longs to please his father but is rewarded only with aggression; who finally sees the reality of the brutal state of which he is a part; and who longs to die but is plucked from danger to be made king of those same people. Kušej makes them all suffer.

The creative work that goes into producing an opera comes in many parts; it’s worth considering them individually, as well as in the whole.

This article has been categorised Opera and tagged background, by Martin Kušej, characterization, How to Stage an Opera, Idomeneo, introduction, Martin Kušej, mozart, Personenregie, Production, Varesco