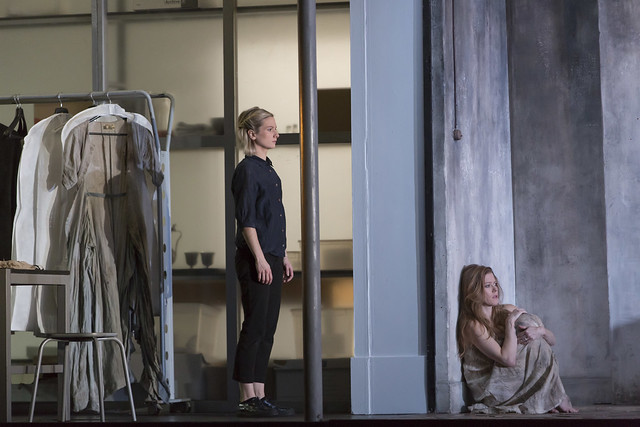 ‘The challenge is to make opera seem natural in the 21st century’, says composer George Benjamin, ‘which is not necessarily so easy’. He meets that challenge in his 2012 opera Written on Skin – arguably this century’s most successful opera – by means that might seem counterintuitive, but whose power cannot be denied.

Written on Skin is Benjamin’s second collaboration with playwright Martin Crimp, after their chamber opera Into the Little Hill of 2006. Both works approach the challenge of naturalism in similar ways. As Benjamin described in his introduction to Into the Little Hill, ‘I wanted to tell our lyric tale in the most direct and authentic way possible, not an easy task in the age of TV and cinema. Our solution… acknowledges at all times the artificial nature of sung drama, while still permitting dialogue and characterization’.

One of these devices in Written on Skin is the characters’ narration of their own actions. In an early dialogue between two of the principal characters, the Protector describes the scene he wants the Boy to depict in an illuminated manuscript: ‘And by day – says the Protector – fruit-trees… turn towards the sun.’ The Boy returns, ‘A book costs money, says the Boy. A book needs long days of light’. As Benjamin explains, ‘The singers can demonstrate to the audience that the dramatic situation is artificial: what’s on stage does not pretend to be reality… there is no attempt to disguise the strangeness of the [operatic] medium’.

On its own this device might seem nothing more than an affectation – but Benjamin and Crimp’s use of it intensifies the ensuing drama. The Protector’s wife Agnès visits the Boy alone while he is working on the manuscript. ‘You’re in my light says the Boy’, says the Boy, but now that narration is part of the long line of his melodic phrase, rather than a staccato aside as it had been in his conversation with the Protector. Looking at his illustration of a figure, Agnès sings, ‘She doesn’t look real, laughs the woman, that’s not how a woman looks’. Later Agnès returns and the Boy has redrawn the figure: ‘I’ve painted the woman’s heart’, he says. Her answer achingly leaps up like a cry: ‘No! not “the woman” – I am Agnès. My name’s Agnès’.

What was an artificial construct now drives at the very heart of the opera’s story, both moving the plot forwards and enriching it. The movement in the text from the abstract to the specific mirrors Agnès’s self-discovery over the course of the opera, as she breaks free from the infantilized persona the Protector has enforced upon her to embrace her individual self. The musical intensity of this line illustrates Agnès’s insistence on this specificity, heightening our shared experience of her discovery of freedom.

More specifically, the identification between Agnès and the woman in the Boy’s manuscript establishes the events of the opera’s final act, where the manuscript becomes the tool that illuminates the Protector about his wife and so precipitates the story’s closing violence. In this scene between the Boy and Agnès, music and text together contain the whole of the story – both what has been and what is to come. As music scholar Christopher Wintle describes in his article for The Royal Opera’s programme book, ‘Because the text has started from further out, this individuation of “Agnès” is, if anything, closer in’.

This artificial device is used as a tool to create two important elements of drama – character development and our empathy with those characters; narrative tension and the inevitability of the events. This is just one illustration of how the partnership between Crimp and Benjamin creates a new form of music drama for our time. As Benjamin says: ‘This way of telling a story means that the language lifts a few inches off the ground, and that’s where there is space for music to enter. Theatrically, I’m attracted by this technique because to me it seems unreal, and it provides a space, if not a need, for music.’

Discover more about George Benjamin and the world of contemporary opera in the exhibition Opera: Passion, Power and Politics, at the V&A Museum 30 September 2017–25 February 2018.

This article has been categorised Opera and tagged by Katie Mitchell, George Benjamin, Into the Little Hill, Martin Crimp, Production, The Royal Opera, Written on Skin