The composer, who celebrates his 80th birthday on 15 July, has a long relationship with The Royal Opera. 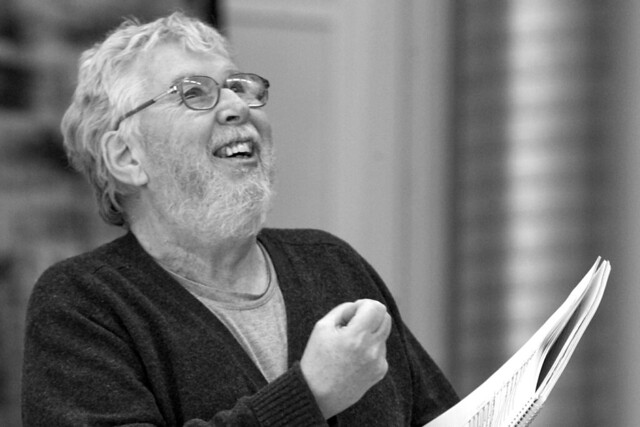 Harrison Birtwistle in rehearsal for The Minotaur, The Royal Opera © Rob Moore

Harrison Birtwistle, one of the foremost figures of contemporary music, celebrates his 80th birthday on 15 July 2014. The Royal Opera has the privilege of sharing a relationship with Birtwistle that stretches back to 1991, with its commission of Gawain. This was followed by 2008's The Minotaur, revived in 2013, and we now look forward to the premiere of The Cure in 2015, a new chamber opera co-commissioned with Aldeburgh Festival and London Sinfonietta. His works have an amazing sense of colour, of imagination, of integrity and of line – an astonishing output for a composer who, with characteristic understatement, describes composing as 'just like knitting'.

For all three of his Royal Opera works Birtwistle has joined forces with poet David Harsent. Speaking before the premiere of The Minotaur, Harsent described their relationship: 'It's a terrific collaboration, it always has been on each occasion that we've worked together… Quite often when I'm writing about something I dream aspects of it too. And I would suspect that if Harry and I both had dreams about the piece we were working on, they would be versions of the same dream.'

David Harsent and Harrison Birtwistle in rehearsal for The Minotaur, The Royal Opera © Rob Moore

Birtwistle is a master of orchestral colour; talking to Tom Service, he explains how in The Minotaur he uses the otherness of the saxophone sound to convey in sound Ariadne's isolation, and the cimbalom as 'an instrument of decay'.

Ryan Wigglesworth, who conducted The Minotaur for The Royal Opera in 2013, describes 'the endless melody that goes through this piece – but it's constantly changing shape and colour and form and is not something you're necessarily conscious of; it works somewhere in the back of your mind. You know that there is a presence somewhere that is constant.'

The Royal Opera's Associate Director of Opera, John Fulljames, picks up on the way that Birtwistle's stage works are 'brilliant theatre music'. This innate sense of drama is strikingly clear in Birtwistle's Royal Opera commissions. Harsent has described how, 'Sometimes he’ll suggest a change that is wholly theatrical rather than musical. He asked me to write something extra for a moment in which Ariadne is alone on stage: "A little aria, about eight lines, make it dark". So I wrote her the aria "The Cretan sun is black". And it turned out to be one of the best moments in the piece, I thought.'

John Fulljames again: 'The mastery across the range of Harry's output – from the large-scale canvases of Gawain and The Minotaur, to the chamber-scale music theatre of both his early and latest works surely mark him out as one of the giants of our time, in any artistic discipline. We await The Cure, and all his future operas, eagerly.'

The Royal Opera's double programme of Birtwistle's chamber operas The Corridor/The Cure will be performed in the Linbury Studio Theatre in summer 2015.

The Royal Opera's premiere production of The Minotaur is available on DVD and Blu-ray.