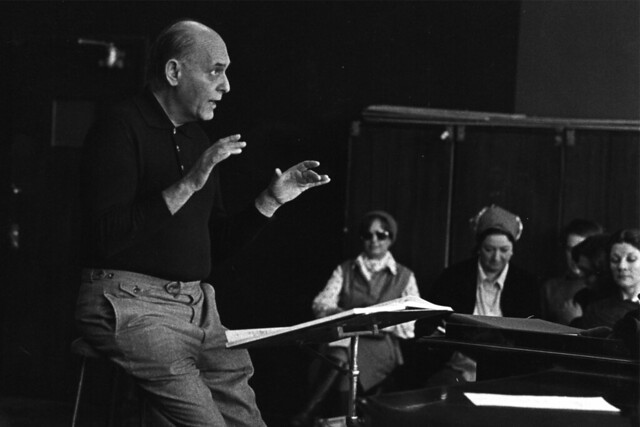 The Exhibitions Team in the Collections Department has been busy during the summer installing Georg Solti and The Royal Opera. The exhibition, which can be seen from the beginning of the season on 24 September 2012, commemorates the centenary of the birth of Georg Solti on 21 October 2012, and is part of worldwide celebrations to mark the Solti 100.

Georg Solti was one of the outstanding conductors of the second half of the 20th century and played an important role in the history and development of The Royal Opera and the Orchestra of the Royal Opera House. One of the aims in curating this exhibition was to provide an insight into Solti’s creative process. The Exhibitions Team spent many hours looking through boxes of photographs and press cutting books to try and find as many images as possible of the conductor at work. These images, in which Solti’s charisma and drive are apparent to see, are at the heart of the chronological exhibition in the Amphitheatre Gallery.

Other material on display, including a sword, costumes, set and costume designs, and posters, are drawn from the Collections of the Royal Opera House.  It was particularly exciting to find two costumes from Solti’s Ring, which are part of a recent gift.  They were badly soiled but after careful cleaning by textile conservators Judith and Bernard Doré, much of the original painting and dying could be seen and it proved possible to authoritatively identify them. Solti came and conducted at the Royal Opera House right up until a few months before his death in 1997 so three costumes from more recent productions have been borrowed from wardrobe. 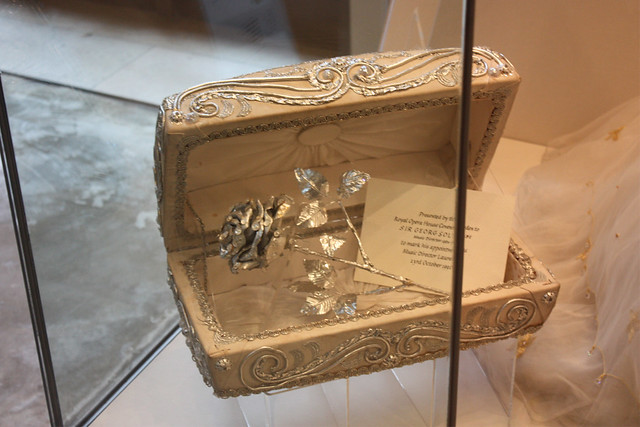 The exhibition also puts Solti in context as a Hungarian Jew. Solti lived through turbulent times in the 1930s and 1940s, and these experiences never left him: he remained implacably opposed to war and with a lifelong horror of men in uniform.  He believed music could be a force for good in the world and a means of uniting people of different backgrounds, and in 1995 he founded a World Orchestra for Peace to mark the 50th anniversary of the birth of the United Nations. Solti can be seen speaking about his life and his beliefs in the film footage on view during daytime opening in the Amphitheatre Gallery.

Work on the Solti exhibition began in March 2012 with a visit to Lady Solti and the Solti Family Archive.  Lady Solti provided invaluable background knowledge as well as generously lending family photographs, personal items belonging to her husband and the striking portrait of him painted by British artist Maggi Hambling in 1985, which can be seen at the end of the Amphitheatre Gallery.

The Solti 100 exhibition is generously supported by the PF Charitable Trust and runs until 22 February 2013. Exhibitions can be visited for free during normal daytime opening Monday-Friday, 10am–3.30pm. Before making a special visit, please call +44(0)20 7304 4000 to check that the front of house spaces are open. It is also possible to book guided tours of some of our most special exhibitions. Visit our Exhibitions page for further details.