From the Archives: The Royal Ballet’s first performance of The Sleeping Beauty in 1946

The Royal Ballet's classic production is 70 years old this year. 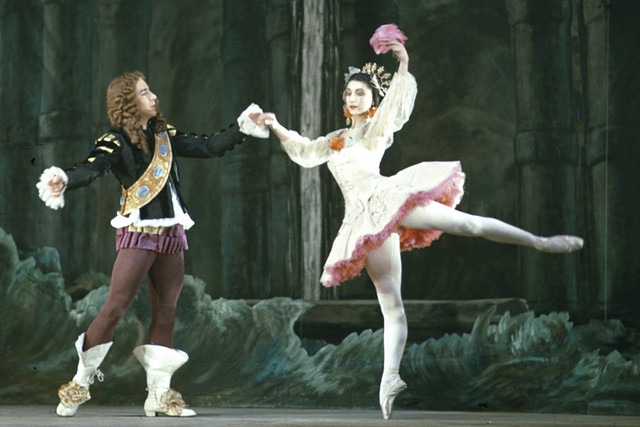 London in 1946 was a city very much still reeling from World War II. The impact of the Blitz bombing was a ubiquitous visible reminder, while rationing continued to take its hold on everyday life. An odd time, one might think, to stage a lavish production of The Sleeping Beauty; but 70 years ago, on 20 February 1946, the Sadler’s Wells Ballet did just that. The Royal Opera House was reclaimed from its wartime stint as a Mecca dance hall and became the new home of the company that would become The Royal Ballet – marking the start of a new era of ballet in London.

It was a momentous occasion. Margot Fonteyn danced Princess Aurora, with Robert Helpmann as both Prince Florimund and Carabosse, and the special gala performance was attended by the Royal family. The production, designed by Oliver Messel and produced by Ninette de Valois, had come to fruition under difficult circumstances: clothing coupons had to be used to purchase fabric, gloves and shoes, while the sets consisted of cheap canvas and paint. Nevertheless, The Sleeping Beauty was an immediate and resounding success, which would continue to grace the Covent Garden stage for a further twenty years. Such was the production’s iconic status that it was revived in 2006, enthralling new generations of audiences.

Stanley Holden as Puss-in-Boots and Margaret Dale as The White Cat in Act III of The Sleeping Beauty (1946) at the Royal Opera House, Covent Garden, the Frank Sharman Collection © 1946 ROH

Beryl Grey as the Lilac Fairy, Margot Fonteyn as Princess Aurora and Robert Helpmann as Prince Florimund in the Vision Scene of The Sleeping Beauty (1946), Sadler's Wells Ballet (later The Royal Ballet). Photograph by Frank Sharman

Members of the audience before the performance of The Sleeping Beauty, Sadler's Wells Ballet (later The Royal Ballet), 1946. Photograph by Frank Sharman © ROH

ROH Collections is very lucky to have some wonderful images of that first performance of The Sleeping Beauty, as part of the Frank Sharman Photographic Collection. This Collection contains prints, colour transparencies and negatives of English and international ballet companies performing in London in the 1940s and 50s, taken by the photographer Frank Sharman. Colour images from this era are a rarity but Sharman’s, taken on Kodachrome film, have retained their colour remarkably well. Sharman photographed from the balconies or stalls during performances, fulfilling an increasing demand for ballet ‘action’ shots – while also adding in a few of the gala audience itself.

Whether Sharman was a professional or aspiring photographer is not known. He was a member of the Royal Photographic Society, whose ballet photographs featured in publications such as the Dancing Times; but he later went on to work as a British agent in a German paper mill. His Collection was bequeathed to ROH Collections by family members in honour of Frank Sharman’s widow, Ethel. It contains images from more than forty productions – but undoubtedly Sharman’s Sleeping Beauty images are the true pinnacle of the Collection. They offer a fascinating glimpse into De Valois and Messel’s vibrant production, and the powerful enchantment it must have held for its war-weary audience.