Five operas adapted from plays: From stage to stave (and back again)

Composers have long been inspired by the work of playwrights. 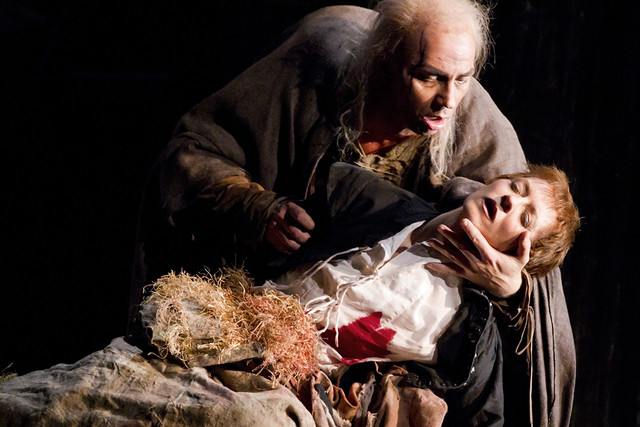 Beaumarchais’s three satirical ‘Figaro’ plays guaranteed him lasting fame – particularly the first two, immortalized in opera by Rossini and Mozart. The irrepressible energy of Le Barbier de Séville (the first and most lighthearted of Beaumarchais’s comedies) proved irresistible to Rossini, who in Il barbiere created a comic masterpiece. In Le nozze di Figaro, Mozart focussed primarily on the most human aspects of Beaumarchais’ second ‘Figaro’ drama (while keeping plenty of the original’s humour), to create one of the warmest and most life affirming works in Western art.

In his great political drama Maria Stuart, Schiller criticizes monarchical absolutism and highlights the dangers of power, embodied in the character of Elisabeth I, who sends her cousin Maria Stuart to death without a fair trial. Donizetti and his librettist Giuseppe Bardari kept much of the play’s essential message in Maria Stuarda; but they also removed the complicated political subplots, and created a love triangle between the Duke of Leicester and the two queens. Schiller’s explorations of the dangers of absolute power, the benefits of democracy and the heroism of freedom-fighting also provided inspiration for Rossini (in Guillaume Tell) and Verdi (in Don Carlo).

Hugo’s great drama depicting the amorous exploits of King Francis I of France was banned after just one performance in 1832, due to its unflattering depiction of a French monarch. When Verdi came across the play in 1850 he described the subject as ‘grand, immense’ and the character of the crippled jester Triboulet (who became Rigoletto) as ‘one of the greatest creations in theatre’. He and his librettist had to fight energetically with the Italian censors to get permission to use Hugo’s play – necessary amends included changing the King into a lower-ranking Duke and moving the action from France to Italy. However, much of the play’s plot and dramatic tone remained intact. Rigoletto was a sell-out success and is still one of the most popular of all operas.

Maurice Maeterlinck’s fantastical Symbolist plays are rarely performed today, but his Pelléas et Mélisande was hugely popular in the 1890s. Maeterlinck’s aesthetic – the exploration of characters’ inner feelings through elements of the natural world, often in a fairytale-like setting – was regarded as a welcome contrast to the naturalism prominent in Parisian theatre of the time. Debussy described the effect of seeing the play in 1893 as ‘like dynamite’ for him. He treated Maeterlinck’s text with great respect when he wrote his opera, leaving much of it intact and only omitting a few short scenes. He also ensured that every nuance could be clearly conveyed, with a predominantly syllabic word setting, almost like ‘sung speech’.

Shakespeare’s much-loved comedy A Midsummer Night’s Dream inspired one of Benjamin Britten’s most popular operas, composed in less than nine months. Britten and his partner Peter Pears (who took the comic role of Flute/Thisby in the opera’s premiere) wrote the libretto, skillfully compressing and reorganizing Shakespeare’s text while sticking faithfully to the Bard’s words – Britten noted that they added only one line of their own. Britten heightened the supernatural strangeness of the fairy scenes by making Oberon a countertenor (a voice rarely used in opera at the time) and Puck a spoken role, and added to the comedy of the rustics’ Pyramus and Thisby play by deftly parodying grand and bel canto opera.