We spoke to the conductor about his Royal Opera debut, Mozart, Verdi and his love of horses. 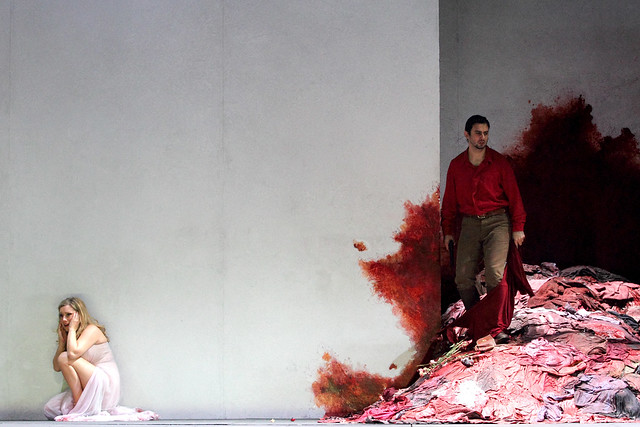 Working with the orchestra is of course a new experience, every time. You have to be natural, you have to explain what you want, with not too many words – but words are also important sometimes. I'm always trying to give maximum importance to the dramaturgy – so people understand why we play this, in which context. The exciting thing is that the orchestra doesn't know Idomeneo very well. It is quite an honour to teach them, and to lead an orchestra that is so experienced as they discover such a major piece.

You and your ensemble Les Musiciens de Louvre Grenoble have been key figures in what's become known as the Baroque renaissance. But your repertory is much wider than that, extending up to the 21st century. How do you approach music from different periods?

I always try to find the right sound for the right repertoire – and sometimes, if possible, with the right instruments. But sometimes what you have in the mind, the fingers, the throat, the heart, is more important than the instruments you are using. I always like to know the spirit of a composer when he composed a piece, what was in his head at that time, what works he might have heard. I'm trying to work like a stage director with an actor – always questioning, finding the right language.

Tell us about Mozart's style in Idomeneo, and the influence of Gluck's 'reform' operas.

The libretto Mozart used was adapted from Idomenée, a 1712 French Baroque opera by André Campra, and it actually has this very straight form. Mozart was not forced to follow the libretto's construction, but he did. So the opera is 'reform' and not reform. Compared to [Gluck's] Orfeo, which is written in a very pure language, no dance music really, nothing very decorative, Idomeneo is more shiny and spectacular.
But there is a use of declamation, and this was the thing that Gluck had brought to classical opera. The strongest example of this in Idomeneo is Ilia, who starts her first recitative almost on the last bar of the overture, without the orchestra even really finishing properly.

The role of Idamante was originally written for a soprano castrato. Mozart later recast the role as a tenor and in this production the role is sung by countertenor Franco Fagioli. What are the modern options we have when finding a replacement for the castrato?

I've done Idomeneo several times with mezzo-sopranos singing Idamante, and once with a soprano and once with a tenor. Every voice has advantages and disadvantages, both with the music and with the stage. You want to have a strong relation and even rivalry between father and son – it's difficult when they are not from the same sex. But when you have a tenor singing Idamantes you tend to have brothers rather than father and son. The director Martin Kušej was really clear that he wanted a man to do the part.
I've worked with Franco several times in lower registers, but his voice was always quite high and now he's a real mezzo-soprano. It's exactly in his tessitura to do this role, and so it's very convincing because he can be a man and can sound like a man but at the original octave that Mozart intended. This, for the quartet, for the trio, is wonderful.

Idomeneo contains some amazingly inventive orchestration.
Ilia's Act II aria ['Se il padre perdei'], with strings and solo flute, oboe, horn and bassoon accompanying the voice, is a masterpiece of simplicity. It's so poetic, so elegantly done. There's also the use of strings alone, for example making such intimacy in Elettra in Act II's 'Idol mio, se reitroso'. The writing here is almost archaic; you could think it's written by Pergolesi or Michael Haydn. There's also the use of four horns for Elettra's delirium scenes – this gives a lot of deepness and sometimes terrifying colours.

Do you have a favourite moment?
The Act III quartet 'Andrò, ramingo e solo' is I think the masterpiece of all Mozart repertory. Every time I do this piece I come to this quartet and I can't believe how strong it is. This is my fifth production of Idomeneo. It's the only opera I have done so much. I'm very moved and honoured to come back to this piece, because it's always more incredible than the last time.