Externalizing the internal: How Wagner depicts the inner world of Tristan und Isolde

Wagner explores the clash between his heroine's interior world and the harsh outer world in this operatic masterpiece. 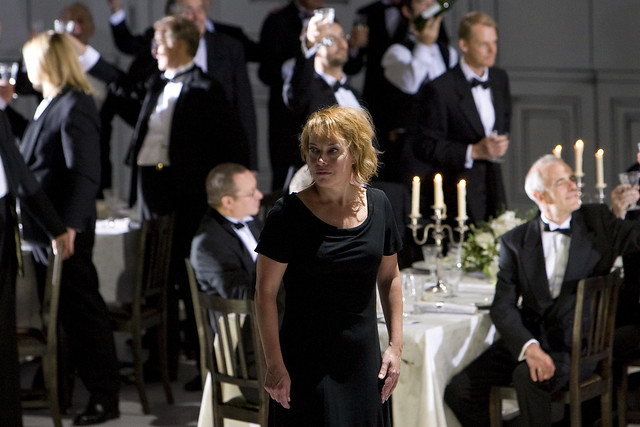 There’s a deliberate untidiness to the way Wagner presents his suffering Irish princess at the beginning of Tristan und Isolde. The original 1865 set design for Isolde’s tent, set up on deck of the ship bound for Cornwall, was to involve myriad hanging cloths amid sails and rigging. Angelo Quaglio the Younger’s designs bear remarkable similarity to the front cloth of the Cuvilliéstheater in Munich, where Tristan und Isolde was to have its premiere (until the size of Wagner’s orchestra prompted a move to the larger Court Theatre). Wagner’s original stage image played with the very elements that comprise the mechanics of the theatre. Isolde’s tent clearly appears as a stage within a stage, with its own front and rear curtains.

Such self-conscious design gambits are hardly the only indication that Wagner was experimenting with representational modes of theatre. Take the Sailor’s song that we hear as this opening tableau is revealed. Realistically enough, the song has no orchestral accompaniment and the Sailor is out of view, so that we might imagine him singing by himself perched up high on the lookout. But the song poses questions to an unnamed Irish maid that provoke Isolde. Her eruptive, defensive response establishes what will become the crux of the drama, but Brangäne – the only other person visible onstage – does not even seem to hear the song. Isolde’s outburst hints at a kind of theatre of the mind.

Through Isolde, we learn that the story of a glorious fairytale marriage of an Irish princess to the King of Cornwall is not what will unfold. Instead, it is the probing of an unspoken love – a story that privileges musically-constructed interiority over a superficial world of appearances and social norms. Wagner’s adaptation of the medieval Tristan legend thus addresses music’s unique expressive strengths, and the powerful reach of the unconscious circulated in the writings of Carl Gustav Carus, Arthur Schopenhauer and others during the composer’s lifetime.

Cycles of progressive revelation unfold across the opera’s first act. The opening scene - as conceived - used a foreshortened stage until Isolde, feeling suffocated, calls out for air. At that moment, Brangäne is to draw open the tapestries that form the rear of the tent, so that we see the full depth of the ship and a view of the sea. With Tristan now in view, Isolde can name the source of her discontent. When Brangäne dutifully approaches Tristan and invites him to visit her mistress, Kurwenal tells all within earshot that Isolde is but booty in the aftermath of conflict. As the other men join in to offer a raucous reprise of Kurwenal’s final phrases, Brangäne shields Isolde from the offensive outburst by closing the rear curtains of the tent. By only the opera’s second scene, we see that the world surrounding Isolde is deceptive, unsympathetic and even coarse.

Isolde’s tent is the only interior physical space in an opera that otherwise takes place entirely outside, and yet it redefines the dramatic parameters so that the external world is devalued. The conflict between Isolde’s reflective realm and the outside world is made strikingly palpable when her tent is finally re-opened at the end of Act I, as the ship docks at Cornwall. The musically jubilant, celebratory arrival signals tragedy for the lovers who have just disclosed the depths of their feelings for one another. Wagner repeats this strategy with the return of Marke’s hunting party at the end of Act II, and his arrival at Kareol at the end of the opera. The last unwelcome intrusion, however, is eclipsed by Isolde’s ‘Transfiguration’ – her ecstatic fusion with the realm of sound as a potent expressive medium of the heightened human condition.

This is an extract from Katherine Syer’s article ‘A Stage Within a Stage’ in The Royal Opera’s programme book, available during performances and from the ROH Shop.

The production is a co-production with Houston Grand Opera and is given with generous philanthropic support from Peter and Fiona Espenhahn, Malcolm Herring, Bertrand and Elisabeth Meunier and Lindsay and Sarah Tomlinson.