Production photos, behind the scenes films and essential guides to Tchaikovsky's adaptation of Pushkin’s novel in verse. 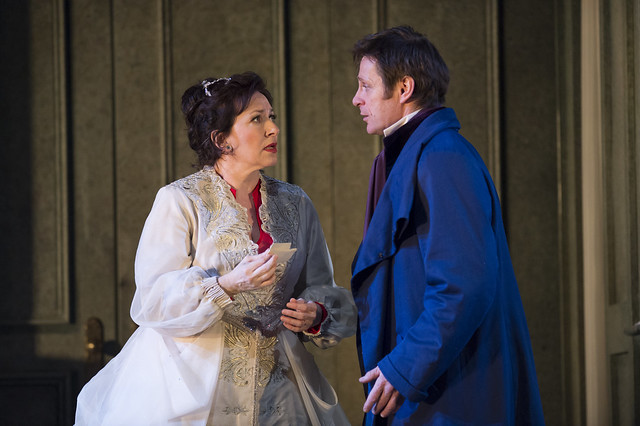 Eugene Onegin is Tchaikovsky's most widely performed opera (although the composer preferred the term 'lyrical scenes'). Based on the novel of the same name, it tells the story of literature-loving Tatyana Larin who falls passionately in love with dashing and worldly Eugene Onegin. He rejects her, despite having feelings for her and his subsequent actions lead to tragedy.

Kasper Holten's production of the opera had its premiere in February 2013 and was one of the productions featured as part of Royal Opera Live. Watch Kasper rehearsing with Principal singers and Dušica Bijelić being guided through a language coaching session.

Inside The Royal Opera Chorus

The Royal Opera Chorus has a particularly large part to play in Eugene Onegin, as peasants on the Larin estate and as courtesans and party goers. Watch our film about the role of the chorus.

Watch the cast and creative team's introduction to the various characters, with rehearsal footage:

Read audience reactions to Eugene Onegin and add your own

Eugene Onegin will be followed by four subsequent Saturday broadcasts from Covent Garden on BBC Radio 3, including Nabucco, La donna del lago, Written on Skin and a live relay of Gloriana. All broadcasts will be available via BBC iPlayer for seven days after broadcast.

Eugene Onegin was generously supported by The Monument Trust, The Artists’ Circle and Hamish and Sophie Forsyth.