A Principal of the Royal Ballet, Edward Watson will be performing in a new ROH2 production of The Metamorphosis later this month, we caught up with him after rehearsals to talk about the creative process. 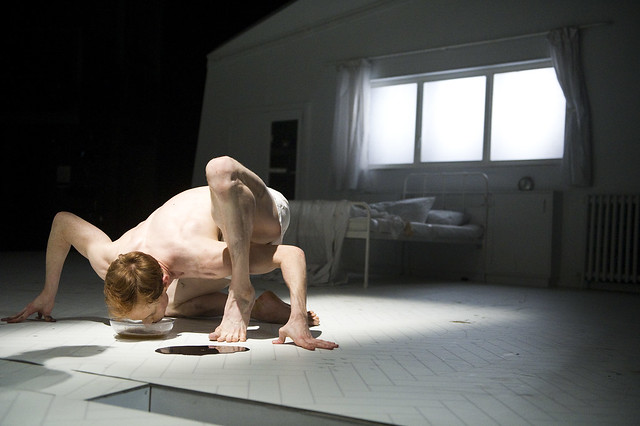 "I spent a lot of time studying movement in wildlife shows – looking at them up close, how they move and how they live and worked out a movement language that wasn't human at all". After 17 years spent dancing to critical and audience acclaim in The Royal Ballet, this must be the first time that Edward Watson has had the work of David Attenborough as a stimulus to his work, not to mention the first time dancing the role of a beetle.

Edward is dancing the role of travelling salesman Gregor Samsa in Arthur Pita's new ROH2 production – a contemporary dance theatre adaptation of Franz Kafka’s novella The Metamorphosis. Samsa wakes one morning to find that he has been transformed into an insect for a reason never discovered. The work explores how the character reacts to his transformation and how his family deal with events.

Kafka's novella carries undercurrents of dark comedy, as well as tragedy, something noted by Edward and the rest of the cast as they read through the book during the development stage; "It's absurd. It's funny, it's strange and sometimes it's moving. But there are lots of moments of humour in there where you laugh and go 'God, but that's so ridiculous'," enthuses Edward about a work famed for its depth under a claustrophobic and cold exterior. "When you read it, you realise every sentence can mean four different things. You start looking for reasons in everything"

Such claustrophobia is mirrored in the set design – a stark, white staging ("You'll see why" offers Edward mysteriously) which shows only two rooms of the Samsa household – the living room and Gregor's bedroom. The staging is in traverse, meaning that there's an opportunity for the audience to get close to the action on the far side of the stage as well as on the stage itself (booking details for these seats at the foot of the page).

In terms of differences from the original novella, Edward notes that the dance theatre adaptation is a relatively faithful one, "The biggest change is that Greta doesn't play the violin, she does ballet instead, that's her thing and I think it works really well". Pita's production features the debut of Royal Ballet School student Laura Day, currently in her Graduate year. Of Laura's role, Edward muses that as well as the obvious physical transformation of Gregor, "The work is more about her own metamorphosis, her change in growing up into adulthood". Pita's production is sure to provide a great opportunity for such a young talent.

Aside from The Metamorphosis, Edward is also rehearsing more traditional Royal Ballet works such as the triple bill of Asphodel Meadows, Enigma Variations and Gloria. The principal artist however, is celebrating the difference, "[The Metamorphosis] doesn't feel that different. It's only different in that the cast is from different backgrounds and disciplines. We're not all classically trained dancers. Laura and I are the only ones but learning about the way everyone else moves has been great. I've been very lucky that I've been able to start the season with this brand new work."