A Spanish-flavoured spectacle featuring some of ballet's most astonishing virtuoso choreography. 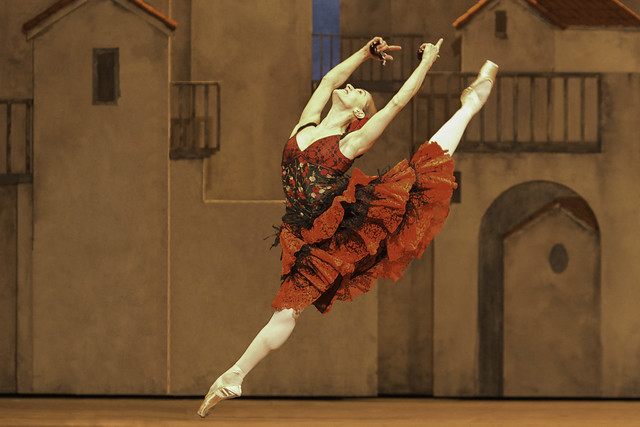 When Carlos Acosta was asked to create a new production of the classic Petipa ballet Don Quixote for The Royal Ballet, he had a clear idea of what he wanted to achieve: ‘I didn’t want to revive a museum piece. I wanted to give something much more fresh, without breaking the narrative, breaking the spirit that makes this ballet such a masterpiece.’ With its energetic choreography, dynamic staging and Spanish flair, his Don Quixote doesn't disappoint. Of its many thrilling moments, the Act I finale is one of the most vibrant, with spectacular solo variations, animated group dances and lively storytelling, all tailored to suit Acosta's vivid interpretation of this exotic ballet.

By this point in the ballet, all eyes are on the beautiful Kitri. She loves the young barber Basilio but is being pursued by the fop Gamache. She’s also entranced the eccentric old gentleman Don Quixote, who is convinced that he must help her as he would the lady of his dreams. In spite of her father Lorenzo’s protests, Kitri has rejected Gamache’s ridiculous advances. Her flourishing relationship with Basilio is encouraged by the townsfolk – all of whom have gathered to make merry in the square.

Basilio performs a showy, bravura variation for Kitri and the crowd. With swaggering brisés and multiple pirouettes danced to the high-spirited triple-time of Minkus's sun-drenched score, the variation ends with flashy barrel turns danced around the stage, finished with a tour en l’air and an invitation to Kitri to show off her moves.

Kitri willingly accepts. To the clatter of castanets and clapping from the crowd, her performance is full of flamenco fire. Among its high leg extensions, and virtuoso en pointe runs is one of the ballet’s iconic images – a grand jeté with a backbend, the head flung back and her castanets held aloft. The variation ends, like Basilio’s, with aplomb - a series of pirouettes performed en diagonale as the matadors drum their heels and swish their capes.

The stars’ astonishing technical display doesn’t end there. Later in the finale, the pair dance together, Basilio sweeping Kitri off her feet in heart-stopping one-handed lifts above his head that bring the music to a halt, and make the crowd – and the audience – hold their breath in admiration.

As Kitri and Basilio take a breather for their grand finale, we get another chance to see spirited dancing from the assembled townsfolk. Kitri’s two friends, dressed in pale purple ruffles, perform a sprightly dance in perfect unison, adopting some of her high extensions and flashy pirouettes, and dextrously flicking their fans. They are briefly interrupted by the town rascals, who bound forward in a raggle-taggle huddle, eager for their moment in the spotlight.

Bursting from the hustle and bustle is a ridiculously silly episode of mime involving Don Quixote’s unfortunate sidekick, Sancho Panza; alongside Gamache and Lorenzo. It’s a rare instance of character roles taking centre-stage during a finale, and gives us a quick, cheerful insight into their personalities – as well as what must be the definitive ballet fish slap.

As the act draws to a close, the townspeople fill the stage in an exuberant group dance, with sprightly balancés, cloaks flung overhead and the swishing of skirts accompanied by Minkus’s shimmering tambourines and fluttering flutes. Basilio and Kitri seize the moment to escape in a cart, hotly pursued by Lorenzo, Gamache, Sancho Panza and Don Quixote. You’re not sure how they’ll do it, but you can be sure these joyful young lovers will get their way in the end.

The production is generously supported by The Friends of Covent Garden.